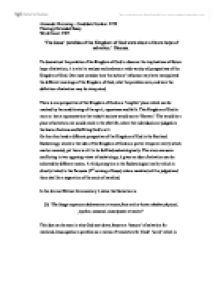 'The Jesus' parables of the Kingdom of God were about a future hope of salvation.' Discuss.

his 'right' as a disciple to be able to practice 'divine law' on mankind, when in fact he is misreading his purpose as a disciple. This parable only gives future hope of salvation to a certain privileged few of those who have knowledge of 'the word' and have leaded a good moral life. What if ignorance was to say that someone had lived a sheltered life and never gained access to the teachings of God and Jesus? Should they not to ascend to heaven? This question is lucidly answered by Jesus in the Matthian version of the Parable of the Sower wherein the final line it sums the message which states: (7) "Anyone who has ears 'should listen!'" This means that the Kingdom of God is in fact inclusive to everyone not just an 'elite' few. The source of this quote may be an interpretation from Mark because the theme of 'universal inclusion' to the Kingdom of God is a common theme in the Gospel of Mark for example: the Parable of the mustard seed and the Parable of the sower. The Lukan parable of The Lost sheep is in contrast to the Matthian Parable of the dragnet, because The Lost Sheep is about inclusion into the Kingdom of God for all people and it is quite litigious in how Jesus is saying that; Heaven (God some would say) is more satisfied if a sinner has repented than rather than many people who have lived their entire lives being morally good. This is in the conclusion of the parable: (8)"There will be more rejoicing in heaven over one sinner repenting than over ninety-nine upright people who have no need of repentance" Here Jesus illustrates that there is no exclusivity (unlike the Parable of the dragnet) ...read more.

This can be understood by Dodd: (15) "The Kingdom of God is conquering of evil which was "realized" in Jesus' life and death". Jesus was proclaiming a prophecy that the Kingdom of God is in heaven, but it can be realized through moral practice on earth. This idea of the 'present' Kingdom of God is heavily criticized as overly optimistic and if man has 'original sin' which must be repented for, a Kingdom of God in this light is incomprehendable. The messianic message of salvation is summed up to a great degree by Vardy and Mills: (16) "Jesus preached the need to respond to God in loving obedience, and the coming of the kingdom of God...He broke down the barriers between 'insider' and 'outsider' and showed, through his life, that God called every human being to follow him. He used parables to communicate his message." This response to God can be understood as that one must practice the Kingdom of God on earth in order to embrace the Kingdom of God in eternal life for example: the parable of the Last Judgment. Jesus breaks down the barriers of 'insider' and 'outsider' in significant parables such as the Parable of the sower; where Jesus states that the Kingdom of God (and primarily Salvation) is open to anyone who takes heed to the teachings of God. The parables were a means to translate the true meaning of the Kingdom of God. Overall the Jesus parables were about a future hope of salvation which could be realized through believing in Jesus Christ and gaining access to the Kingdom of God where ultimately salvation would occur. ...read more.