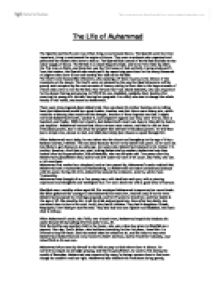 The Life of Muhammad.

The Life of Muhammad The Quarish and Hanifs were two tribes living in and around Mecca. The Quarish were the most important, living in and around the region of Mecca. They were merchants who organised and protected the traders that came to Mecca. The Quarish had control of the Ka'bah and also to the water supply of Mecca. The Ka'bah is a cubed shaped temple, said to be first made by Adam, the first man on Earth, and therefore was the first house of God on Earth. Having made profit from the traders, the Quarish also made profit by supervising provisions for the many thousands of pilgrims that came to see and worship the idols at the Ka'bah. The Hanifs were honourable tribesmen, who would go off alone to pray in the silence of the mountains or the desert. The Hanifs were not pleased by the way the Quarish became selfish, greedy and corrupted by the vast amounts of money coming to them due to the huge amounts of visitors that came to see the Ka'bah. One famous Hanif was Abd-al-Muttalib, who was respected for his devout fasting and praying. In 570 CE his son, Abdullah, suddenly died, shortly after marrying his young wife Aminah, leaving her pregnant. Her child, who was to change the whole history of the world, was known as Muhammad. There were many legends about Muhammad. One was about his mother hearing voices telling here that Muhammad would be a great leader. Another was that there was a heavy rain, which would be a blessing that would end the drought. ...read more.

-Sometimes the message came to him at random times, like when he was riding or talking to the public. -A few times, Jibril the angel came to him in the form of a man to give him more revelations. During these visions, Muhammad always felt very close to death, and feeling that his soul was leaving his body. However, he always returned to his normal state after a revelation, and repeated what he had heard, so he could remember it. After Muhammad had received the message to go forth and preach by Allah, he began to do this with great urgency. He made people realise that there was a God, and there is an afterlife. Also, he told people that after death, you would be judged, if you had been a good person, you will be rewarded in the afterlife, and if you were a bad person, you would be punished throughout the afterlife. He convinced the people that life was only a test for the day of judgement. He also said that God was merciful, and will forgive you if you learn from your mistakes and are sorry about them. He also said that God give a perfectly fair decision, so if you have been bad all your life, you definitely will be punished. Muhammad also insisted that everyone's duty was to serve God, because God is a lot more important than your friends, family and any other useless idol that could not even be compared to God. Muhammad also taught that women and slaves deserved their dignity too, as these two groups had little rights and were badly treated frequently. ...read more.

The Muslims were confident, but there were mistakes fought in the battle. The lack of discipline and confusion of tactics led to a lost battle, leaving Muhammad wounded with two lost teeth. In 630 CE, Muhammad went into Makkah with 10 000 men. He was unchallenged. He went on his camel and went around the Ka'bah 7 times, and then touched the black stone set in the corner of the Ka'bah. He conquered the city in the name of Allah, and Makkah was now his. Only 11 people died outside the city. The Makkans accepted the Muslim faith, and they became Muslims. Makkah became the city the dedicated to Allah. Only Muslims were allowed to enter this city, and this ban is still in force today. In 632 CE, Muhammad new that he would die soon, and he went back to Makkah with 140 000 pilgrims, and he climbed Mount Mercy, and gave his last sermon. He asked the people to continue as how they were, and continue being part of the faith of Islam. When Muhammad came back home, he fell ill with violent headaches, becoming weak. He asked permission of all his wives to go to Aishah's room, where they could nurse him until he died. With his head in Aishah's lap, he died. Abu Bakr then became the leader of the Muslims, and told them not to pray to Muhammad, but to Allah. In conclusion to this, I would say Muhammad is the best role model for a Muslim, because was a devout Muslim, who was a patient and deeply religious man. He was also a great leader, and was also and honest man. He went through all his hardships, and continued his work even through deep sorrow. ...read more.