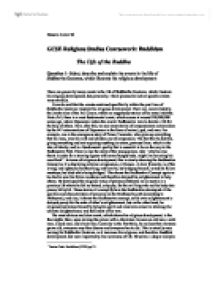 The Life of the Buddha.

Hossein Amini 5S GCSE Religious Studies Coursework: Buddhism The Life of the Buddha Question 1- Select, describe and explain the events in the life of Siddhartha Gautama, which illustrate his religious development There are generally many events in the life of Siddhartha Gautama, which illustrate his religious development, but personally, I have planned to look at specific events very carefully. It can be said that the events contained specifically within the past lives of Siddhartha Guatama illustrate his religious development. There are, most evidently, the Jataka tales of the Pali Canon, which are supposedly stories of his actual rebirths. First of all, there is a most fundamental event, which occurs at around 100,000,000 aeons ago, where Dipuncena makes the crucial Bodhissatva vow to devote a life for the help of others. Now, after this, we see many stories of compassionate actions done by the 547 reincarnations of Dipuncena in the form of animal, god, and man. For example, one is the courageous story of Prince Vessantra, who gives up everything that he owns, even his wife and children out of compassion. The fact that he did this, giving everything and not expecting anything in return, portrays Dana, which is the idea of charity, and is a fundamental quality that is essential to be on the way to the Bodhissatva Path. ...read more.

After this critical and indeed, pivotal moment, Siddhartha could now no longer enjoy any of the luxuries which had been set out for him, as he was conscious of the fact that none of these could save him from age, disease, or even death. However, he finally sees the fourth sight, the holy man, i.e a person truly devoted to spirituality. Now, this consequently leads him to decide that he too, can go and 'seek after the unborn, unageing, unailing, deathless, sorrowless, undefiled supreme surceases of bondage, nibbana'2. So, he decided that 'he too would leave home to seek a cure for the world's suffering'3. He had felt so uneasy about human suffering that he thought by becoming an ascetic; he would understand and comprehend everything there is. Therefore it can be said that these sights led him straight onto the path of religious development, and especially on the road to understanding Dukkha (all life is suffering). One of the most evident parts of Siddhartha Gautama's religious development, was when he was enlightened. After receiving an alms bowl, Siddhartha Gautama left the hardship, and arduousness of the ascetic life. Upon doing this however, he left himself with no friends from his past, but nevertheless, was strongly assured by what he was doing, since he had evidently found the middle way (the reality between luxury and poverty). ...read more.