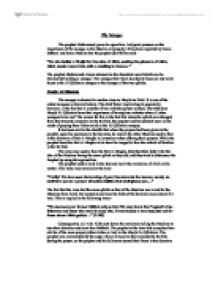 The Mosque - its importance to the islamic religion

The Mosque The prophet Muhammad, peace be upon him, laid great pressure on the importance of the mosque in the Muslim community. It has been reported by Imam Bukhari and Imam Muslim that the prophet (SAW) has said:- "He who builds a Masjid for the sake of Allah, seeking the pleasure of Allah, Allah would reward him with a dwelling in Heaven." The prophet Muhammad always stressed on the abundant award which can be attained by building a mosque. The mosque that I have decided to focus on and write about is the Al-Qiblatain mosque or the mosque of the two qiblahs. Masjid Al-Qiblatain The mosque is situated in madina close to Masjid an-Nabi. It is one of the oldest mosques in Islamic history. The chief factor implicating its popularity, however, is the fact that it consists of two mihrabs (prayer niches). But why does Masjid Al-Qiblatain have that importance of having two mihrabs when all other mosques have one? The reason for this is the fact that when the qiblah was changed, from that towards Jerusalem to the Ka'bah, the prophet and his sahabah were in the midst of praying there Zohar salah in the Al-Qiblatain mosque. It has been said in the ahadith that when the prayers had been given to the prophet, upon his ascension to the heavens, he and all the other Muslims used to face in the direction of Bait al-Maqdis in Jerusalem when offering their prayers. ...read more.

The main dome is raised on a drum of glass panes which encourage the light to filter on to the interior, above the mihrab. A replica of the mihrab found in the Dome of the Rock reminds onlookers of the oldest mihrab of Islam. The Imam The term Imam denotes a person who has relevant qualities to lead a congregational prayer. The word Imam literally means 'in the front', this emphasises the principle reason of having an Imam. The Imam, who is obligated to be male, leads the congregation; therefore he is required to have certain qualities which are suited to a leader. The Imam has to be selected with great care and attention as he represents the prophet, peace be upon him, in the mosque. His duties and responsibilities are profound:- Hadrat Abu Mas'ud has reported the holy Prophet as saying: "The Imam of the Muslims should be such a one who possesses the deepest knowledge and understanding of the Qur'an. If all are equal in this, the Imam should be the one who has the deepest knowledge of the Sunnah and Shari'ah. If all are equal in this, he should be the one who migrated first. And if all are equal in this too, then the one who is most senior in age." (Muslim) This hadith of the prophet signifies the magnitude of the Imams work and his knowledge. The Imam must be the best man available among the worshippers in the aspects of knowledge, righteousness, spirit of sacrifice and insight into religion. ...read more.

9. The Imam is responsible for setting the saffs, or rows, for congregation therefore he must ensure that everyone is standing correctly with no gaps in between them. Through this we may reflect on the attributes an Imam is required to have, hence we have to choose our Imams correctly as the validity of our prayer depends on the validity of the Imam's prayer. The Muslim community must consult and from there decide upon who to choose as the Imam, for it is said in the Quran:- "The Muslims are to organize their affairs on the basis of mutual consultation" (42:38) The Role of the Mosque in the Muslim Community The mosque is a place for worship, education, and a refuge from the cares of the world. The word 'masjid' is derived from the word meaning 'place for prostration' or 'sajdah'. The salaah however may be performed anywhere, the prophet (SAW) said:- "The whole earth is made as a place of worship and a means of cleansing for me," Hadith Although the salaah might be offered anywhere it is highly desirable for a man to offer it in congregation:- Ibn Abbas narrates, "I heard the prophet saying, 'If a person in spite of hearing the adhan does not go to the masjid without strong excuse then his salaah is not accepted,'" Abu Daud There is much more reward for praying in congregation. Some Muslims have the notion that the masjid is limited to a place of worship. This however is not true. The prophet, peace be upon him, ...read more.