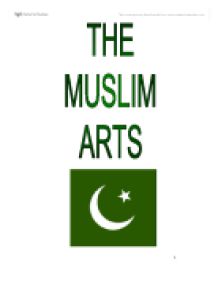 Contents page 1. Introduction 3 2. The Holy Prophet 4 3. Famous Historical Landmarks 5 i) Dome of the Rock 5 ii) Taj Mahal 6 iii) Mecca 7 iv) The Ka'ba 8 4. Islamic Calligraphy & Art 9 i) Mosaic Decorations 10 ii) Islamic Paintings 11 5. Bibliography 12 Introduction Assalam-al-aluikum, through out this booklet I'm going to describe about how Islam, one of today's leading religions, started off. I am also going to show you some of the world's most beautiful calligraphy, most well decorated mosques and the most famous historic Islamic landmarks. I will also be explaining a few basic principles and the meanings of some of the holy words in the Qur'an. The Holy Prophet The prophet Muhammad was born in 571CE. He was born into one of the most rich and powerful Quraish tribes. He never saw his father and his mother died when he was six years old. He then lived with his grandfather, until he was eight years old. When he died he moved to live with his Uncle Abu Talib, who cared and protected him. Muhammad soon began to look after his uncle's sheep and helped in expanding his uncle's profits and trade. He became respected by many merchants, by doing many things e.g. ...read more.

Islam was a message to save mankind from suffering and illness. It was to teach kindness and to lead men to live good and clean lives and to test who can withstand all the world's evil temptations. It also teaches you self-discipline, because you're the only one who can stop yourself from doing bad things. Famous Historic Landmarks In Islam there are many very magnificent old architural Mosques and buildings. Most of them have some of the most exquisite patterns and symbolic calligraphy along the inside and outside of the walls. Most of them were built where they are because something special happened there as you can see in the following. The Dome of The Rock The Dome of the Rock was built in Jerusalem and it is called the most beautiful building in Jerusalem, the Dome of the Rock is the holiest Muslim shrine in the city. I have been inside it once and Muslims believe that gold-domed building was built over the rock from which Muhammad rose to heaven. Jews also believe it is the place Abraham prepared to sacrifice his son, Isaac. Taj Mahal The Taj Mahal, designed as a tomb for the wife of a 17th-century Mughal emperor, was constructed by about 20,000 workers from 1631 to 1648 in Agra, a city in northern India. ...read more.

In the background a gardener works industriously. Mosaic Decoration Because the representation of living things were forbidden in Islamic religion, abstract patterns, usually depicted in mosaic, were used, and these reached great heights of refinement in Islamic architectural decoration. This intricate geometric scheme, used in conjunction with quotations from the Koran in the elegant Kufic script, decorates the interior of a madrasah in E�fah�n, Iran. Central Dome, Hagia Sophia, Istanbul The central dome of Hagia Sophia is decorated with intricate geometric patterns created by means of small pieces of gilded glass and marble of different colours. Roundels enclosing gold calligraphic script fill the pendentives. Such abstract patterns, used with quotations from the Koran executed in the elegant Kufic script, are typical of Islamic decorative schemes. ISLAMIC PAINTINGS Laila and Majnun at School Bizhad, one of the great Persian miniature painters, gave new impetus to the Oriental tradition of miniature painting.Laila and Majnun at School (1494) shows his skilful use of pattern and colour, and his graceful, calligraphic line. The flat, layered perspective shows the influence of Chinese landscapes. The juxtaposition of scenes taking place indoors and outdoors is particularly notable. Persian Manuscript A range of texts, from the Koran to scientific and literary works, and books of tales and fables, were illuminated in Islamic Persia. This page, from a Persian manuscript dating from the 13th century, consists of text and an accompanying illustration showing a group of men on horseback. ...read more.