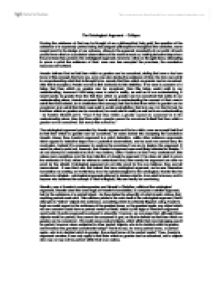 Kant's first objection, therefore, offers the same complaint as Gaunilo, that objects cannot be defined into existence - It is true that a triangle must possess those 3 sides to be a triangle, in the same way God must possess existence to be God, however this does not stop us from denying that the triangle would exist, and in a similar manner we can deny of God existing (Although Gaunilo does not offer this directly, it is implied within his perfect island parody). We can see, therefore, that Descartes offers no proof for those who would deny the existence of God, but merely affirms those who already believe, or offers a rational basis for belief. To defend the ontological argument of this criticism, one must look to Anselm's Monologium. The Monologium, which precedes the Proslogium, can be thought of as Anselm's true proof for the existence of God, the ontological argument is merely an affirmation of the conclusions brought about by the Monologium. Inside the Monologium, Anselm's appeals to the platonic forms, in that he invites us to sort 5 men, in order of their justice, asking by what could be the mechanism which we would all arrive at the same order; Anselm's claims that all goods are judged through a supreme good, which relates strongly to the platonic concept of the forms, and that such a supreme good can only be thought of as God. If we are to take this to be Anselm's main proof, the criticisms offered against the ontological argument seem irrelevant, as it was not meant to pursuade in any form, rather affirm the conclusions that Anselm had drawn. ...read more.