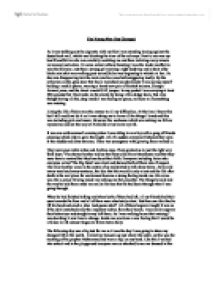 The Young Man Has Changed.

The Young Man Has Changed As I was stabbing out the cigarette with my foot I was standing leaning against the dusty black wall, which was blocking the view of the railways. Next to me was my best friend Salim who was carefully watching me and then imitating every minute movement and action. To some extent without boasting I was the leader and Salim was the follower. Just then a young girl wearing a tight body top and a short silky black mini skirt was walking past us and Salim was beginning to whistle at her. As she was disappearing into the main road we were both sniggering loudly. By the reflection on the glass door that had a varnished wooden border I was seeing myself holding a mobile phone, wearing a brand new pair of Reebok trainers, Georgio Armani jeans, and the latest v-neck GAP jumper. In my pocket I was carrying at least fifty pounds that I had made on the streets by doing a few dodgy deals. ...read more.

When he had finished talking and when both of them had left, all my friends had their eyes towards the floor and all of them were absolutely silent. But then one idiot had to lift his head and crack a joke. And guess what? All of them began to laugh! It was as if the devil snatched away the important advice from their hearts. I was really angry at their behaviour and straight away left them. As I was walking home that evening I was deciding it was time to change. Inside me was born a new feeling that I would be a failure in life unless I began to follow Islam fully. The following day was a big test for me as it was the day I was going to show my changed life to the world. I rolled my trousers up just above the ankle, as this was the teaching of the prophet Muhammad and wore a topi on my head. ...read more.

The thoughts that make me do this are the images of heaven and hell. They alarm me every time I am about to do something bad and so far these are my strongest motivators in life. Now death has become something I think about a lot. The other evening when I was coming back home from college I was waiting for a train on the Blackhorse Road's filthy platform and this was making me think that I am like a traveller in this world and soon I will leave it. When the train was coming and as it got nearer it stared at me with its beaming eyes and roared even louder and this was making me feel scared, as it was reminding me of the Angel of Death who takes away everyone's life. On the same evening after reaching Woodgrange Park station, I was walking home using a different route and by chance I was passing the old, dusty, black wall and it was bringing back my shameful past. I whispered to myself, 'What an idiot you were.' 'Topi is a hat worn by Muslims.' ...read more.