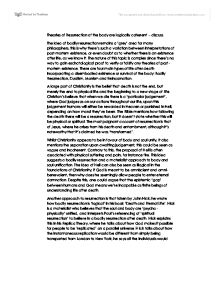 Theories of Resurrection of the body are logically coherent - Discuss

Theories of Resurrection of the body are logically coherent - discuss. The idea of bodily resurrection remains a 'grey' area for many philosophers, this is why there's such a variation between interpretations of post-mortem existence, or even doubt as to whether there is an existence after life, as we know it. The nature of this topic is complex since there's no way to gain eschatological proof to verify or falsify any theories of post-mortem existence. There are four main types of life after death incorporating a disembodied existence or survival of the body: Bodily Resurrection, Dualism, Monism and Reincarnation. A large part of Christianity is the belief that death is not the end, but merely the end to physical life and the beginning to a new stage of life. Christian's believe that when we die there is a 'particular judgement', where God judges us on our actions throughout our life, upon this judgement humans will either be rewarded in Heaven or punished in Hell, depending on how moral they've been. The Bible mentions how following the death there will be a resurrection, but it doesn't state whether this will be physical or spiritual. ...read more.

Other Dualists such as Descartes and Kant have also distinguished the body from the soul. Descartes famously said 'I think therefore I am', he demonstrates how we consider ourselves thinking beings distinct from the body. Kant also suggests that the soul is for thinking, but refers to this as 'reason'. Kant suggests how we need to separate the soul from the bodily desires to make reasonable moral decisions, so the soul can reach Summon Bonum (the Supreme Happiness). Following these beliefs, both Plato and Price deduced that the soul/mind will live on because the body is finite. This implies that theories that suggest bodily resurrection are incoherent, since it is the soul/mind, which are eternal, and that body is finite and therefore cannot exist after death. Whilst other dualists such as Descartes and Kant, believed that the 'thinking' or 'reasoning' function of the soul makes it superior from the body, and thus they also would believed that bodily resurrection is incoherent because it is the soul that is capable of a post-mortem existence. Alternatively, Monists would believe that any belief in the afterlife is incoherent, disagreeing with Christianity, Hick and Dualists. ...read more.

Both these religious theories follow the idea of karma and suggest an almost dualist distinction of body and 'soul' (self/consciousness). Both would call the idea of bodily resurrection logically incoherent since they're monotheistic and follow their religious doctrines, through meditation and 'indoctrination' of texts. However, arguably the lack of eschatological proof makes these religious theories just as incoherent since there is no proof to verify faith. On balance, I think the four main theories on the afterlife: bodily resurrection, dualism, rebirth and monism, could all be deemed illogical and incoherent by an opposing theory, principally since the nature of this topic makes all theories unverifiable. However, at the same time Hick claims that his argument is coherent since it cannot be falsified, and covers all the 'gaps' in his argument by claiming that we'll find out eschatologically, whilst Christianity claims an accessible personal relationship with God would be proof. Therefore, I think for Christians and supporters of Hick their theories may seem logical and coherent, but for other theories there may seem a lack of proof and thus deem bodily resurrection as illogical and incoherent; I this is because faith is unverifiable and ultimately no theory is more coherent than another. ...read more.