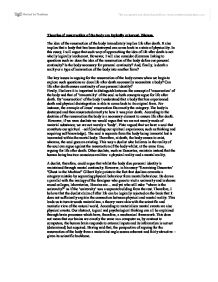 Theories of the resurrection of the body are logically coherent.

According to materialism mental events are also physical events. Our abstract, logical and psychological thinking can all be explained through brain processes which have, therefore, a mechanical framework. This does not mean that our brains are exactly the same as a computer as, by contrast to computers, the human brain responds to external inputs and its information is not set (determined) but acquired. Having said that, the perspective of arguing for the resurrection of the body from a materialist angle seems coherent and fairly attractive - given its scientific backbone. Consider this grim scenario; suppose a scientist was able to create an exact replica of your body and brain using your genes and freeze them so that they could be activated at your death. You then would die and would be replaced by this replica, in all respects, another 'you'. Such process could be deemed as bodily resurrection (even though not in the conventional sense) and seems perfectly logically possible. This type of resurrection is strictly materialist and there is no need to account for another, spiritual, dimension. Yet, the person being re-created is not the same person but just a mere copy. ...read more.

I have to underline that it is the same body that undergoes the process of resurrection - not another one put in its place. Yet, in the example of the clone the clone is a construction separate from its original. Therefore, I believe we can talk of this kind of bodily resurrection as being a reconstruction which seeks to preserve the continuity of the same type of entity. To conclude with, in this essay I have analysed and commented on the idea of bodily resurrection from both a dualist and a materialist point of view. I came to an intermediate conclusion about the dualist approach as not being logical enough since it distinguishes between mind and body as if they were two completely differing substances, thus, causing a category mistake. I also argued against Kant's version of the replica theory on the basis that, despite being logically correct, it is far too hypothetical. On the other hand, the materialist approach (despite seeming more coherent) ultimately fails, too, to support the idea of reincarnation. One last final remark, by following a materialist view one could come to the conclusion that death is not a reality but merely a transformation of matter into other types of matters. Therefore, the question of life after death and the question of resurrection simply do not arise. ...read more.

This essay is clearly written and with confidence. It discusses three basic points, (anti-dualism, anti-Hick, and pro-bodily replication) which are developed quite accurately. The student attempts to present his own argument, which is commendable, but here gets very confused. Their account of bodily replication doesn't really address the question of bodily resurrection and they themselves note in the conclusion that this doesn't really work. This undermines the essay's main conclusion. The conclusion and the student's attempted evaluation and commentary are highly confused. Multiple threads are taken up and none of them really work. Credit must be given for clearly communicating a couple of key areas of concern and showing some awareness of the problems with the arguments (an awareness which, unfortunately, undermines the essay's own argument).