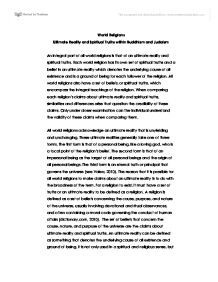 Ultimate Reality and Spiritual Truths within Buddhism and Judaism

Dukkha marks anything that is not satisfactory in each individual's life, whether it is physical suffering, mental suffering or change in life which causes good things to become impermanent. The Four Noble Truths: - All forms of life, particularly human life, are marked by dukkha. - Dukkha and rebirth are caused by desire for the things of this world and for the survival of the self. - Escape from dukkha - nirvana - is only possible if human desire can be eliminated. - Release from desire and from dukkha comes by following the Noble Eightfold Path. (See Understanding Faith, 2010) These noble truths and the belief in nirvana are what Buddhists turn to for spiritual guidance. Ultimate reality in Buddhism differs greatly from that in many other world religions. Like in Hinduism, Buddhists believe in reincarnation but this belief differs to Hindu's where they try to keep good karma in this life to better their position in the next. In Buddhism, the state of nirvana is reached when there is no more reincarnation for the self. Only by eliminating desire, giving up attachment to this world, rejecting the very belief that one's self is to be saved, can a person find release from the circle of reincarnation (see Understanding Faith, 2010). ...read more.