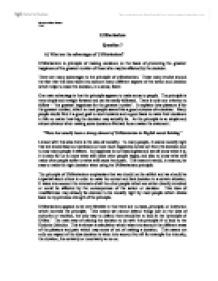 Utilitarianism Question 7 A) What are the advantages of Utilitarianism? Utilitarianism is principle of making decisions on the basis of promoting the greatest happiness of the greatest number of those who may be affected by the decision. There are many advantages to the principle of utilitarianism. These many evolve around the fact that this idea takes into account many different aspects of the action and decision which helps to make the decision, in a sense, fairer. One main advantage is that the principle appears to make sense to people. The principle is very simple and straight forward and can be easily followed. There is only one criterion to follow - 'the greatest happiness for the greatest number'. It explains how pleasure if for the greatest number, which to most people seams like a good outcome of a decision. Many people would find it a good goal to work towards and a good basis to make their decisions in life no matter how big the decision may actually be. As the principle is so simple and almost obvious when making some decisions Richard Jones makes the statement: "There has usually been a strong element of Utilitarianism in English moral thinking" Linked with this idea there is the idea of morality. ...read more.

If the idea was complex and not based on experience people may find it hard to understand and accept. C Brown states: "Consciously or unconsciously utilitarianism has become absorbed into the bloodstream of much modern thinking." To sum up the strengths of the principle of Utilitarianism, it is a relative approach to ethics and ethical decisions and can be applied to many different circumstances and it can be applied in many different ways. The main strength its self is the simplicity of the argument and how it can appeal to many different groups of people and in many different ways. Richard Jones in Groundwork of Christian Ethics sums up the strength of utilitarianism by saying: "The greatest strengths of Utilitarianism in practice are its plain universal and common sense style about much of its arguments, especially when being critical of established authorities such as church of state" B) Identify the main problems of Utilitarianism. To what extent do these make Utilitarianism unacceptable? One of the main weaknesses of the principle of Utilitarianism is the meaning of happiness. The main problem being finding a definition for the word 'happiness'. One definition which has been put forward is: 'state of achieving ones desire'. ...read more.

Morality is also about motive and intention." One major wide spread problem with utilitarianism is that it can promote people to do wrong actions, which may even be against our law, but according to a utilitarian this would be the right thing to do. Wrong things can be made to appear right to a utilitarian. Not only this but it does not take into account the actual action and intention. It only takes into account the result or consequence and this again can result in the action its self being wrong. I think these problems make utilitarianism unacceptable. The fact that you are to go against your family if it is to being happiness to people you don't even know, to me is completely wrong and goes against family loyalties which I believe are the strongest loyalties you should have. Not only this but in some circumstances this can encourage people to break the law and go against 'wrong' and 'right'. The fact that utilitarians base the decisions on the consequence but yet have no way of knowing the consequences of the action is extremely unreliable. This means that there is no certainty that there principle is the best thing to do. Hannah O'Shea-Herriot 12M ...read more.