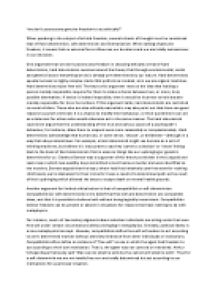 We don't possess any genuine freedom to act ethically. Discuss.

﻿"we don't possess any genuine freedom to act ethically?" When speaking in the subject of ethical freedom, several schools of thought must be considered that of Hard determinism, soft determinism and libertarianism. When talking of genuine freedom, it means that no external force influences our decisions and we are totally autonomous in our decisions. One argument that we don't possess any freedom in choosing ethically is that of hard determinism, hard determinism revolves around the theory that through environmental, social and genetic factors everything we do is already pre-determined by our nature. Hard determinists equate humans to highly complex clocks that preform as created, as in we are organic machines. Hard determinists reject free will. The key to this argument rests on the idea that holding a person morally responsible requires for them to make a choice between two, or more, truly possible alternatives. If choice is indeed impossible, then it would be incorrect to hold anyone morally responsible for his or her actions. ...read more.

and were identified as the murders, Darrow argued that the boys, whom had lived relatively care free want for nothing child hoods, we're blameless for their crime for it was a result of a determined path as the result of their upbringing which allowed the boys to escape death on mental health grounds. Another argument for limited ethical action is that of compatibilist or soft determinism. Compatibilist (or soft determinism) is the belief that free will and determinism are compatible ideas, and that it is possible to believe both without being logically inconsistent. Compatibilists believe freedom can be present or absent in situations for reasons that have nothing to do with metaphysics. For instance, courts of law make judgments about whether individuals are acting under their own free will under certain circumstances without bringing in metaphysics. Similarly, political liberty is a non-metaphysical concept. Likewise, compatibilists define free will as freedom to act according to one's determined motives without arbitrary hindrance from other individuals or institutions. ...read more.

Thus, determinism (or at least "hard" determinism) is not true and humans have moral responsibility for their actions. An example of this is an idea posed by John Locke, that a man awakes in a room after being unconscious there is a locked door, which the man does not know its locked, and a bed. The man decides to sit on the bed and not try the door, even though no external idea gives him the idea that it would be futile thus he was free to chose even though he had no real choice. This ties in with free will in that we have a choice but it may not necessarily have a choice merely an appearance of one. It is arguable that we do have a degree of freewill as suggested by compatabilism but our choices and decisions are partly influenced by things beyond our control such as genetics or upbringing. This means that we do possess some freedom to act ethically but it is not undetermined by external stimulus. ...read more.