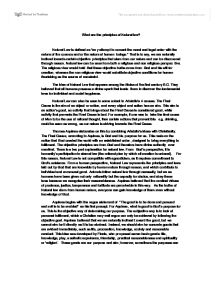 What are the principles of natural law? Every adult has the right to become a parent. Discuss

What are the principles of Natural law? Natural Law is defined as "any attempt to cement the moral and legal order with the nature of the cosmos and or the nature of human beings." That is to say, we are naturally inclined towards certain objective principles that stem from our nature and can be discovered through reason. Natural law can be seen from both a religious and non religious perspective. The religious view would hold that these objective truths come from God and his will for creation; whereas the non religious view would substitute objective conditions for human flourishing as the source of constraint. The idea of Natural Law first appears among the Stoics of the first century B.C. They believed that all humans possess a divine spark that leads them to discover the fundamental laws for individual and social happiness. Natural Law can also be seen to some extent in Aristotle's 4 causes. The Final Cause is the aim of an object or action, and every object and action has an aim. This aim is an action's good, so activity that brings about the Final Cause is considered good, while activity that prevents the Final Cause is bad. For example, if one was to take the final cause of Man to be the use of rational thought, then certain actions that prevent this e.g. drinking, could be seen as wrong, as our nature is striving towards the Final Cause. Thomas Aquinas elaborates on this by combining Aristotle's ideas with Christianity. The Final Cause, according to Aquinas, is God and his purpose for us. This rests on the notion that God created the world with an established order, designed to bring everything to fulfilment. The objective principles are from God and therefore have divine authority over mankind. There is a two part explanation for natural law. From God's perspective, it is humanity's participation in eternal law (the rational plan by which all creation is ordered). ...read more.

This means that abortion fails both condition (1) and (2). However, if the mother's uterus happened to be cancerous, she is allowed to have a hysterectomy, which will result in the death of the foetus. This is because the removal of the cancerous uterus is morally good (satisfying the first and second condition, as it is not the foetus' death that is saving the mother's life) and the death of the foetus is unintended (condition (3)). Condition (4) is passed as the saving of the mother's life is at least as good as saving the foetus. Natural Law is not without its problems. It could be argued that morals are made for human good, and that Natural Law gets this the wrong way round, with humans following rules for their own sake. Furthermore, the doctrine of double effect implies that there is only ever one right answer to a moral dilemma, which imposes an artificial rigidity onto human existence. A utilitarian argument against the doctrine would also be that sometimes a small evil must be done for a greater good, e.g. torturing an innocent person to save thousands of lives. Once the principle of natural law is broken in such cases, then it is vulnerable in all cases. David Hume argued that Natural is based on a false premise as 'is' cannot lead to 'ought'. What is the case is different from what ought to be the case. For example, it may be the case that a man feels the urge to kill in anger, but just because this is the case does not mean he ought to kill. A natural urge may lead to rape or murder. However, Aquinas would counter that natural inclination refers to the inclination of humanity as a whole, thereby condemning such urges. Natural Law holds that reason can discover correct moral principles and that we will not flourish without adherence to them. Of course, the debate over Natural Law's validity is fundamentally rooted in the discussion of objectivity/subjectivity. ...read more.

This argument is flawed. Firstly, there is little evidence that a high proportion of naturally conceived embryos die. Secondly, we can apply the logic that the embryos would 'never have existed' to children of any age, yet parents do not have a right to destroy their children. Surrogacy is an issue that is closely linked with IVF. It involves a woman who agrees to become pregnant and deliver a child for a contracted party. The reasons for surrogacy are the same as those for IVF, but surrogacy has its own problems which stem from what it entails. For example, in surrogacy the parent's rights are considered over the child's. This goes against the Declaration of Helsinki which states that "concern for the interests of the subject must always take precedence over the interests to science and society". It is also argued that depriving a child of the right to know its natural parents can lead to identity problems. This highlights a bigger problem, who are the 'real' parents? In surrogacy there can be multiple 'parents': the woman carrying the child, the couple wanting the child and in some cases, the sperm or egg donor. This situation can lead to severe psychological complications, as the surrogate mother can sometimes form a bond with the child, resulting in trauma when having to give it away, or even refusal to do so. This can be further exacerbated by the feelings of jealousy that may arise with regard to using someone else's sperm or egg. Couples naturally feel a sense of belonging to each other and surrogacy sometimes requires these to be put aside to have a baby. However, the jealousy will not necessarily go away and the relationship of the couple can be threatened. While the idea that every adult has the right to be a parent seems quite clear at first, certain issues mean that the answer is not so easy to arrive at. Issues involving those who cannot naturally conceive but want a child lead to problems with ethics of science and (particularly in surrogacy) profound emotional consequences. ...read more.