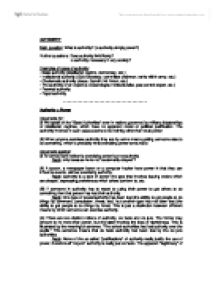 Reply: If this is ever so, surely such a person is not really an authority? A mouthpiece is no more than a passive instrument. Usually the charismatic figure is exercising some influence over their followers, rather than just reflecting what is already there. (vi) Winch argued that authority is simply freely accepting some external constraint upon one's behaviour, and that this is involved in any meaningful human action. To be meaningful, any action must be rule-governed. A rule is an external standard of correctness/incorrectness. Any free choice involves the assumption of a correct/incorrect decision, and there is no relevant difference between accepting the authority of a rule and accepting the authority of a person. Reply: a rule in itself has no authority; it is purely abstract, and it is itself inert. It has no authority because in itself it has no power. (vii) Power is something you take for yourself, authority is given to you. Reply: To exercise your authority you are nevertheless exercising influence, i.e. affecting people's behaviour, which amounts to a form of power. ...read more.

You might think their decisions misguided, but, in so far as they exercise authority over you, you defer to their judgement. There can be many reasons for deferring to someone else's judgement, including persuasion (whether it is rational or non-rational persuasion), subconscious influence, or just a feeling of trust, or perhaps even by brute coercion. In other words, there may be specific forms of power behind authority. There is still a distinction between exercising a specific form of power directly, and exercising power via exercising authority, i.e. via getting someone to accept, or defer to, your judgement. Of course, many cases of authority involve power as well. For example, we might conform to a "No skating" sign partly because we respect the authorities' judgement that it is dangerous, and partly because we know there's a risk of a hefty fine. On the other hand, one feature of the "power = authority" view remains, namely that there is no intrinsic legitimacy to authority. The notion involves no built-in rightness about it. Just like exercising specific forms of power, getting someone to accept your authority (getting them to defer to your judgement) may or may not be justified. ...read more.