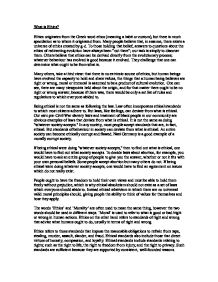 What is Ethics? Ethics originates from the Greek word ethos (meaning a habit or custom), but there is much speculation as to where it originated from. Many people believe that, in essence, there exists a universe of ethics created by g-d. To those holding that belief, answers to questions about the ethics of redirecting evolution have always been "out there"; our task is simply to discover them. Others believe that ethics can be derived directly from the evolutionary process; whatever behaviour has evolved is good because it evolved. They challenge that one can determine what ought to be from what is. Many others, take a third view: that there is no extrinsic source of ethics, but human beings have evolved the capacity to hold and share values, the things that a human being believes are right or wrong, moral or immoral is assumed to be a product of cultural evolution. ...read more.

If being ethical were doing "whatever society accepts," then to find out what is ethical, one would have to find out what society accepts. To decide laws about abortion, for example, you would have to ask an entire group of people to give you the answer, whether or not it fits with your own personal beliefs. Some people accept abortion but many others do not. If being ethical were doing whatever society accepts, one would have to find an agreement on issues which do not really exist. People ought to have the freedom to hold their own views and must be able to hold them freely without prejudice, which is why ethical absolutism should not exist as a set of laws which everyone should abide to. Instead ethical relativism in which there are no universal valid moral principles should, giving people the ability to think of values for themselves and how they apply. ...read more.

Ethics also means the continuous effort of studying our own moral beliefs and our moral conduct, and striving to ensure that we, and the organization we help to shape, live up to standards that are reasonable and solidly-based. One must also be able to question their own beliefs, and ought to consider other ethnicities and have the freedom to talk freely about them. In conclusion, ethics is the study of right and wrong or good and bad. It is an enormous philosophical subject ranging from an exercise in deciding how people should act towards each other to how they should act in certain situations. For some, ethics is about how people seek to justify their action and for others it is about how we use words such as right and wrong. There is no set definition for ethics, different people view it differently. Philosophers agree that every aspect of our lives not just informs our ethical decision making but is also a part of it. ...read more.