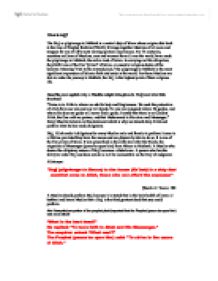 What is hajj? The Hajj or pilgrimage to Makkah is a central duty of Islam whose origins date back to the time of Prophet Ibrahim (PBUH). It brings together Muslims of all races and tongues for one of life's most moving spiritual experiences. For 14 centuries, countless millions of Muslims, men and women from all over the world, have made the pilgrimage to Makkah, the native land of Islam. In carrying out this obligation, they fulfill one of the five "pillars" of Islam, or essential religious duties of the believer. Meaning "visit to the revered place," the pilgrimage to Makkah is the most significant expression of Islamic faith and unity in the world. ...read more.

I testify that there is no God but Allah, the One with no partner, and that Muhammad is His slave and Messenger." Every Muslim believes in this statement which is why we should obey Allah and perform what he has made obligatory. Hajj, Allah made it obligatory for every Muslim male and female to perform it once in a lifetime provided they have the means and are physically able to do so. It is one of the five pillars of Islam. It was prescribed in the sixth year after the Hijrah, the migration of Messenger (peace be upon him) from Mecca to Madinah. A Muslim who denies the obligatory nature of Hajj becomes a disbeliever. ...read more.

was once asked: "What is the best deed?" He replied: "To have faith in Allah and His Messenger." The enquirer asked: "What next?" The Prophet (peace be upon him) said: "To strive in the cause of Allah." The enquirer asked again: "What is the next best thing?". He replied: "Hajj Mabrur (a faultless Hajj that is free of sin and is graced with divine acceptance and pleasure)." Also for women it is the best deed to perform because the mother of the believers `A'ishah once said: "O Prophet of Allah! Jihad (fighting in the cause of Allah) is the best deed. Should we (women) then, not actively participate in it?" The Prophet (peace be upon him) replied: "The best Jihad for you is Hajj Mabrur." This hadith was collected by al-bukhari and Muslim the two of the most authentic hadith. ...read more.