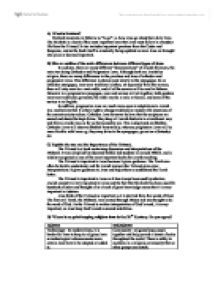 What is Halakah? Give an account of the main differences between different types of Jews.

A) What is Halakah? Halakah translates in Hebrew as "to go" i.e. how Jews go about their daily lives. The Halakah is a book of the most important laws that Jews must follow in everyday life from the Talmud. It also includes important practises from the Codes and Responsa, and so the book itself is constantly being updated as more laws are brought into place or deemed important. B) Give an outline of the main differences between different types of Jews. In Judaism, there are many different "denominations" of Jewish followers, the main two being Orthodox and Progressive Jews. Although both are Jewish by religion, there are many differences in the practises and laws of orthodox and progressive Jews. This difference is shown most clearly in the synagogue. In an orthodox synagogue, men wear traditional clothes, sit separately from the women, there will only ever be a male rabbi, and all of the service will be read in Hebrew. ...read more.

The Talmud is important to Jews because it gives guidance. The Torah can often be hard to understand, and for Jewish learners the Talmud gives clear interpretations. It gives guidance to Jews and helps them to understand the Torah better. The Talmud is important to Jews as it has always been used by scholars. Jewish ancestry is very important to Jews and the fact that this book has been used for hundreds of years and thought of as a book of great knowledge means that it is very important in Judaism. Jews think of the Talmud as important as it is derived from the words of God. The first oral Torah, the Mishnah, was created through Moses and was thought to be the word of God. As the Talmud is written interpretation of God's word, it is very important, as Jews keep God's word as sacred and divine. D) "There is no point keeping religious laws in the 20th Century. ...read more.

Without religion, many people's lives would feel empty, and they would be left without a point to follow. Religion gives people something to believe in, something that they can turn to when all else has failed them. In conclusion, I disagree with the above statement, instead believing that there is definitely an important purpose of religion. Especially in Judaism, it is important to have a community of people that can protect each other from any dangers they may face, and without this, people would have nowhere to turn to when they are in trouble. People need guidance to maintain the smooth running of everyday life, and religion provides a set of morals that are easy to understand and stick to. Laws can easily be added to adapt to modern day society, and many technological barriers can be overcome. Hatred and violence would still take place without religion, except that people would have no-one to turn to when things got really bad. In conclusion, I feel that there is a purpose to religion. ...read more.