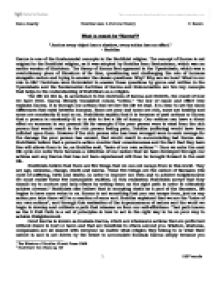 What is meant by &quot;Karma&quot;?

What is meant by "Karma"? "Just as every object has a shadow, every action has an effect." - Buddha Karma is one of the fundamental concepts in the Buddhist religion. The concept of Karma is not original to the Buddhist religion, as it was adopted by Buddha from Brahminism, which was an earlier version of Hinduism. The theory of Karma first appeared in the Upanishads, which was a revolutionary piece of literature of its time, questioning and challenging the role of humans alongside nature and trying to answer the classic questions: Why? Why are we here? What is our role in life? Doctrines were formulated to answer these questions by gurus and written in the Upanishads and the fundamental doctrines of Karma and Reincarnation are two key concepts that helps in the understanding of Buddhism as a religion. The life we live is, in accordance to the doctrines of Karma and Rebirth, the result of how we have lived. Karma literally translated means "Action." The law of cause and effect best explains Karma. It is through our actions that we live the life we lead. It is clear to see the stark differences that exist between humans. Some are poor and some are rich, some are healthy and some are constantly ill and so on. Buddhists explain that it is because of past actions or Karma that a person is constantly ill or is able to live a life of luxury. ...read more.

Some actions result in neutral Karma. Breathing, walking, talking are all actions but if you don't harm an animal while walking or speak harshly of others then this results in neutral Karma which does not affect you or anyone else. It is a widely held belief that Karma is the source of natural human talent. Someone maybe naturally good at a sport or in a topic in academic studies and it is through the karmic tendencies that have been inherited through their previous lives that result in a natural ability that emerges. One prime example is the Buddha himself.5 He inherited like everyone else the reproductive cells and genes of his mother (given the way she conceived) but his physical and mental attributes were that of accumulated Karma as he himself stated that he belonged to the Aryan Buddha lineage and not of the Royal lineage of his parents. Buddha was a creation of his own accumulated Karma from his previous lives. It is also stated that Buddha inherited 32 physical features that were a sign of his past meritorious deeds. Buddhists like to use nature as an example to explain their doctrines and concepts. Karma in association with nature can be explained using the seed, the tree and the fruit. Karma in essence is the potential seed. That seed will grow according to the choices you make regarding you actions. ...read more.

It is not fatalistic in the sense that god or fate predetermines everything before you are reborn but karma does determine some aspects of your life. For instance what type of family you will be born into, whether or not you will be ill or healthy, poor or rich, face constant misery or relative happiness, but that is because of our previous Karma that has not been experienced. Karma in essence is the Cause and Effect. Every action has a similar reaction. A good action results in a good reaction and vice versa. It is important to accept that the concept of Reincarnation is as normal as believing that god exists. This is where the West has trouble understanding and explaining Karma. Buddhists believe that we can control the nature of our lives. Buddhists understand that they are not able to change their past actions or the actions of others, or prevent its results, but they are in control of the way they re-act upon them. The Buddha teaches that studying the nature of our actions (before, during and after we act) can help us discern what is helpful and what is a hindrance upon the path to escape the Dukkha of birth death and rebirth. Adapting to the Noble Eightfold Path and adopting a selfless way of life can help us overcome our desires, common to our human nature. By eliminating our selfishness and becoming totally selfless we can conquer our lives by escaping rebirth and starting the Samsara all over again and achieve nirvana. ...read more.