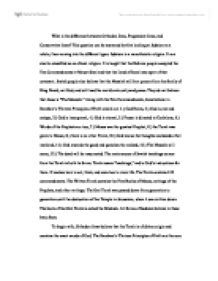 What is the difference between Orthodox Jews, Progressive Jews, and Conservative Jews?

What is the difference between Orthodox Jews, Progressive Jews, and Conservative Jews? This question can be answered by first looking at Judaism as a whole, then moving into the different types. Judaism is a monotheistic religion. It can also be classified as an ethical religion. It is taught that the Hebrew people accepted the Ten Commandments at Mount Sinai and that the Land of Israel was apart of that covenant. Jewish people also believe that the Messiah will be a person from the family of King David, not God, and will lead the world onto unity and peace. They do not believe that Jesus is "The Messiah." Along with the Ten Commandments, Jews believe in Rambam's Thirteen Principles of Faith which are: 1.) God Exists, 2.) God is one and unique, 3.) God is incorporeal, 4.) God is eternal, 5.) Prayer is directed to God alone, 6.) Words of the Prophets are true, 7.) Moses was the greatest Prophet, 8.) ...read more.

They believe that they are the true continuation of the faith that was accepted at Mt. Sinai. This is not a unified movement with a single governing body. It is a collaboration of many different movements that strictly follow Judaism. Orthodox Judaism is said to be the only movement to preserve the foundations of Jewish theology. Next, the Reform, or progressive, Judaism is the largest Jewish movement in North America. It was founded by Rabbi Isaac Mayer Wise nearly 125 years ago. This form of Judaism is rooted in the Bible in the teachings of the Hebrew prophets. Practices of the "Progressivists" are grounded in Jewish thought and tradition and give complete equality to all Jews no matter what. They also challenge the laws that are opposing Judaism's base principles. The movement states that all Jews are essential to the world wide community of Jewish people. One of their guiding principles is the right to individuality. Every Reform Jew has the right to choose which activities to participate in and what practices to practice. ...read more.

The seven core values of the Conservatives are: 1.) The centrality of modern Israel. 2.) Hebrew is the irreplaceable language of Jewish expression. 3.) Devotion to the ideal of Klal Yisrael. 4.) The defining role of Torah in the reshaping of Judaism. 5.) The study of the Torah. 6.) The governance of Jewish life by Halakha. 7.) The belief in God. In conclusion, while instilling the core teachings of the Torah, and the belief in God, Orthodox Jews, Progressive Jews, and Conservative Jews, differ greatly in their overall views of Judaism. Orthodox Jews take a more traditional outlook by preserving the original teachings of the prophets. Progressive Jews are much more liberal and modern. They believe in equality and adaptation for all. Last, but not least, Conservative Jews take a more passive role, and have adapted their own set of values by which one should live. Overall, Judaism seems to be rather complicated and slightly overwhelming to someone with little religious knowledge. Michelle Nock Mr. Frank Ferreri Intro to World Religions 2300-002 Monday and Wednesday 12-150pm Fall 2003 Essay Number #6 Topic #4 ...read more.