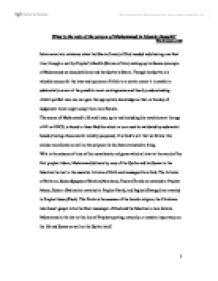 What is the role of the person of Muhammad in Islamic thought?

What is the role of the person of Muhammad in Islamic thought? Word Count; 1680 Islam came into existence when the Sharia (Laws) of God needed redelivering one final time through a worthy Prophet's Hadith (Stories of him) making up his Sunna (example of Muhammad we should follow) and the Qur'an's Sharia. Though the Qur'an is a valuable source for the laws and opinions of Allah to a certain extent it is unable to substantially cover all the possible moral contingencies and thus by understanding Allah's perfect man one can gain the appropriate knowledge so that on the day of Judgement Allah might accept them into Heaven. The source of Muhammad's life and times, up to and including his revelations at the age of 40 in 610CE, is found in these Hadiths which in turn must be validated by substantial Isnads (tracing of sources for validity purposes). It is God's will that we follow this sinless man (Isma) as well as the scripture he has been entrusted to bring. With in the scheme of time of the monotheistic religions which all start at the word of the first prophet Adam, Muhammad delivers by way of the Qur'an and his Sunna to the Muslims the last in the essential Articles of Faith and messages from God. ...read more.

held in Ka'bah; on viewing the document they were stunned to see that ants had eaten the most part of the document leaving only the opening words "In your name, Allah." However, this and the effects of the death of his beloved wife Khadijah (ra) and his uncle Abu Talib left the Prophet sad with deep personal sorrow. Already we start to see what a strong man Muhammad was and why people of his own time even before he turned forty and started his revelation were so impressed by him and especially his involvement and devotion to the Order of Chivalry. It is essential to Islam that Muhammad must have Isma (protection from error) and his ability to cope with crisis and massive opposition from large empires and armies without crumbling is testament to a great man alone. Muhammad's presence in Islamic thought was prophesied by Jesus and in case of doubt there is other evidence such as the disappearance of the majority of the document detailing his ban from his family. Moreover, the story of the walls of Ka'bah validates God chose of Muhammad; the story says that when the walls fell and the task of moving the Black Stone needed allocating there was disagreement as it had been there since the time of Abraham. ...read more.

To which he answer himself saying "May God pardon you; go in peace; there shall be no responsibility on you today; you are free!" Within a matter of hours Muhammad conquered Mecca by putting a Muslim Meccan chief in charge. By the time Muhammad left for Madinah the city was emptied of soldiers and battle which must have helped Islam's name. "He bequeathed to posterity, a religion of pure monotheism; he created a well-disciplined State out of the existent chaos and gave peace in place of the war of everybody against everybody else; he established a harmonious equilibrium between the spiritual and the temporal, between the mosque and the citadel; he left a new system of law, which dispensed impartial justice, in which even the head of the State was as much a subject to it as any commoner, and in which religious tolerance was so great that non-Muslim inhabitants of Muslim countries equally enjoyed complete juridical, judicial and cultural autonomy."3 Between these acts and his insurance that revenues would be used to help the poor more than any state today might be able to achieve in comparison m really did set the bar for politicians as well as being the Prophet of God. ...read more.