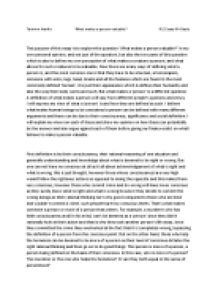 What makes a person valuable?

﻿Tanmim Hanifa What makes a person valuable? R.E Essay Mr Bauly The purpose of this essay is to explore the question ?What makes a person valuable?? in my own personal opinion, and not just of the question, but also the two parts of this question which is also to define my own perception of what makes a creature a person, and what allows for such creatures to be valuable. Now there are many ways of defining what a person is, and the most common one is that they have to be a human, a homosapien, someone with arms, legs, head, brains and all the features which are found in the most commonly defined ?human?, it is just their appearance which is defines their humanity and also the way their body works and such. But what makes a ?person? is a different question. A definition of what makes a person will vary from different people?s opinions and views, I will express my view of what a ?person? is and how they are defined as such. I believe what makes human beings to be considered a person can be defined with many different arguments and these can be due to their consciousness, significance and social definition. I will explain my views on each of these and show my opinion on how these can potentially be the answer ...read more.

Now onto the argument where a person is defined by significance, I think this case isn?t looking at the fact at how significant a person is to society but is explaining that a person is a true person when the give significance to another being or a thing. Some people believe that this is what makes a person, when a being makes an object or someone please, be important in their life. For example a mobile phone, in many peoples life this is very important to them and this shows that the person has given significance to this object. This is what is believed to define a person as they are expressing emotion to an object, a person has the power to make a thing be so important to them and also create a kind of bond to this object where they would keep it safe and treat it like another being in essence. But however using this as an argument to define what a person is can be counter argued as dogs and various other animals have been proven to show significance of an object or even a person to themselves. For example a dog, when they are very fond of their owner that shows they?re giving significance to the owner, does this make them a person? ...read more.

fortunate, that is a part of our intention, that is our reason to be living, that I what makes us valuable as we have a goal to achieve and that is to become a good Muslim and follow the Qur?an. Without this intention, there really wouldn?t be a meaning to life, as what is the ultimate goal. You don?t live just to grow up, learn, get a job, make a living and just die. We all have a purpose in this life, everyone is valuable, and their beliefs make them valuable as they are giving themselves a life goal. Take for example an atheist who doesn?t believe in god and argues that human race has happened by chance. They don?t have no intentions but to have a good life and make a living; however does this make their lives valuable? If so, then to whom does it make their life valuable in their sense? Society? Or a greater being such as god? This is why I believe a persons value is given to them by themselves, depending on their intentions in life and also their beliefs. A Muslim person will see themselves as valuable since they believe they have a goal to complete, to please Allah. A person who doesn?t believe in any faiths would deem themselves as less valuable since they have no ultimate goal. ...read more.