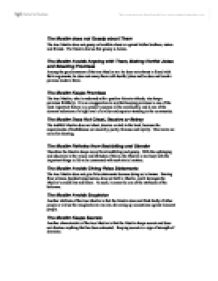 What Muslims should or should not do.

The Muslim does not Gossip about Them The true Muslim does not gossip or backbite about or against his/her brothers, sisters and friends. The Muslim knows that gossip is haram. The Muslim Avoids Arguing with Them, Making Hurtful Jokes and Breaking Promises Among the good manners of the true Muslim are: he does not exhaust a friend with futile arguments, he does not annoy them with hurtful jokes and he does not break a promise made to them. The Muslim Keeps Promises The true Muslim, who is endowed with a positive Islamic attitude, also keeps promises faithfully. It is no exaggeration to say that keeping promises is one of the most important factors in a person's success in the community, and is one of the clearest indicators of a high level of civility and superior standing in the community. The Muslim Does Not Cheat, Deceive or Betray The truthful Muslim does not cheat, deceive or stab in the back, because the requirements of truthfulness are sincerity, purity, fairness and loyalty. ...read more.

Justice and avoiding oppression are at the heart of faith and aqidah and have been enjoined in clear commandments of the Quran and ahadith, about which there can be no fabrication. The Muslim has a Sense of Humor The Muslim has a sense of humor, which makes people like the Muslim. The Muslim mixes with them and jokes with them when it is appropriate to do so, without going to extremes or saying anything harmful. Similarly, when the Muslim is serious, the Muslim does not go to extremes of harshness and strictness. The Muslim's humor is within the limits of Islamic tolerance and does not go beyond the bounds of truth. The Muslim Does Not Interfere in that which is not of One's Concern The Muslim who is concerned with the his level of Islam and seeks to attain the pleasure of Allah does not interfere with that which does not concern him, does not pry into other people's private business, and does nor indulge in empty arguments about rumors of who said what. ...read more.

The true Muslim heeds and fears this warning. The Muslim does not Make Fun of Anyone The Muslim whose personality has been infused with love of humility will be the least likely to despise people or make fun of them. The Quranic guidance that has instilled modesty and aversion to arrogance within the Muslim, has also forbidden the Muslim to make fun of people or despise them. The Muslim Calls People to the Truth The true Muslim is always active and lives for dawa. The Muslim does not wait for circumstances and events to do good, rather the Muslim takes the initiative to call people to the truth of Islam, seeking thereby the great reward that Allah has promised those who sincerely call other to the truth. The Muslim is not a Hypocrite The true Muslim is furthest removed from hypocrisy, flattery and false praise. The guidance of Islam provides protection from sinking to the lowest level, as so many people nowadays have done, without realizing that they have sunk into the depth of disastrous, loathsome hypocrisy. ...read more.