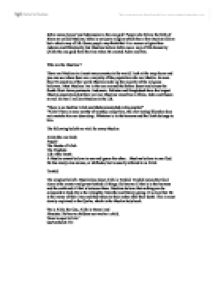 Who are the Muslims ?

Isl�m means 'peace' and 'submission to the one god'. People who follow the faith of Islam are called Muslims. Isl�m is not just a religion which has a few rituals to follow but a whole way of life. Some people may think that it is a newer religion than Judaism and Christianity, but Muslims believe Isl�m was a way of life chosen by (Allah the one god) from the time when He created Adam and Eve. Who are the Muslims ? There are Muslims in almost every country in the world. Look at the map above and you can see where there are a majority of the population who are Muslim. In more than 50 countries of the world Muslims make up the majority of the religious believers. Most Muslims live in the area around the Sahara desert and across the South-West Asian peninsular. Indonesia, Pakistan and Bangladesh have the largest Muslim populations but there are also Muslims minorities in China, India and Russia as well as over 2 million Muslims in the UK. "There is no God but Allah and Muhammad pbuh is his prophet" "Allah! There is none worthy of worship except him, the ever-lasting! ...read more.

None is equal to him.' Qur'an Surah 112 Shirk Shirk means ascribing partners to Allah, and it is the opposite to Tawhid. One can perform shirk in many ways, sometimes not even realising they are doing so. Simply by making something an obsession and giving it more importance than God can be shirk. When people suggest that there are other beings (idols) who share the same powers of God, they are performing shirk. Angels Angels are created from light and are to serve Allah in various ways; there are angels who are messengers and angels who perform duties, whether they are registering life and death, good or bad deeds, or controlling the weather. The four mentioned and most well known angels in the Qur'an are: Jibreel (Gabriel) - The messenger of Allah who brings down the revelations. He passed on the revelation of the Qur'an to Muhammad on the 'Night of Power' during the last ten nights of Ramadan, and often re-visited him to recite and check the revision to make sure not a single letter or word was misplaced. ...read more.

As a sign of respect for the prophets, Muslims add "peace be upon him" whenever they mention the name of one of them. From amongst those numerous prophets, the Qur'an mentions the following ones with a narration of their stories: Adam Noah (Nuh) Abraham (Ibrahim) Ishmael (Isma'il) Isaac (Ishaq) Lot (Lut) Jacob (Yaqub) Joseph (Yusuf) Jethro (Shu'aib) Moses (Musa) David (Daud) Solomon (Sulaiman) Jonah (Yunus) Zechariah (Zakariya) John (Yahya) Jesus (Isa) Muhammad Peace be upon them all A Muslim believes that all the messengers of Allah brought essentially the same message, so they believe in all the prophets and make no distinction between any of them, they are all equal in the sight of Allah, and yet had totally different situations to deal with during their appointed times on earth, from which Muslims are able to compare and know the situations they might encounter during their life time. The prophets were examples for Muslims to follow in order to stay on the straight path to paradise through righteous action. Whilst the stories of all the prophets are available for inspiration, only the life example of prophet Muhammad pbuh is closely emulated by Muslims, and Muslims refer to themselves as "Ummah Muhammad", the nation of Muhammad pbuh. ...read more.