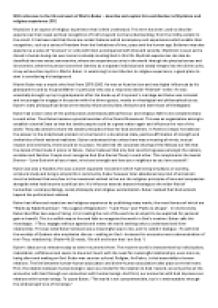 With reference to the life and work of Martin Buber describe and explain this contribution to Mysticism and religious experience.

Transfer-Encoding: chunked ﻿With reference to the life and work of Martin Buber ? describe and explain this contribution to Mysticism and religious experience. (35) Mysticism is an aspect of religious experience that is little understood. This term has been used to describe experiences that reveal spiritual recognition of truths beyond normal understanding, from the mildly ecstatic to the occult. It has been said that there are certain features which accompany such experiences which enable their recognition, such as a sense of freedom from the limitations of time, space and the human ego. Believers may also experience a sense of ?oneness? or unity with God, accompanied with bliss and serenity. Mysticism is seen as the closest a human being can ever come to actually meeting God in this life. Mystical experiences can also be classified into two areas: extrovertive, where one experiences unity in the world through the physical senses and introvertive, where the person loses their identity as a separate individual and slowly merges into the divine unity. A key extrovertive mystic is Martin Buber. ...read more.

Buber understood that unless there was a meeting of minds, mutual respect and sensitivity, there would be no peace. He admired the corporate sharing of the Kibbutz but felt that the denial of God made it prone to failure. Buber believed that only God could bring peace amongst the nations, societies and families. People must recognise God (the Eternal Thou) in each other. This compliments the Jewish Shema ? ?Love God with all your heart, mind and strength and love your neighbour as you love yourself.? Buber was also a Hasidist; this was a Jewish separatist movement which had strong emphasis on worship, scriptural study and living a simple life in community. Buber however later abandoned any kind of extremism since he believed that very few in the movement wished to live out the religious principles of love and compassion alongside what had become a political aim. His influence extends beyond theology to the wider field of humanities: social psychology, social philosophy and religious existentialism. Buber realised that God extends beyond the political and national. ...read more.

The link between human-human association and divine-human association takes place on three levels: First, the relation between human beings is seen as a model for the relation to God. Second, we only arrive at the encounter with God through our encounters with human beings. And third, our encounter with God improves our relations with human beings. To quote Buber, ?The world is not comprehensible, but it is embraceable: through the embracing of one of its beings.? Buber opposes all movements, philosophical and otherwise, which attempt to understand our relationship with God as anything other than a conversation between two active participants. Most fervently, however, he opposes the Enlightenment philosophers who seek to turn God into an abstract principle, the Romantic philosophers who sought to turn God into nature, and the 19th century atheists, such as Nietzsche and Marx, who sought to prove that God is nothing but a sad delusion. Overall, Buber was an incredible scholar whose contribution to mysticism and religious experience has been immense. To quote him, ?When I meet a man, I am not concerned about his opinions, I am concerned about the man; I think that no human being can give more than this, making life possible for the other if only for a moment.? ...read more.