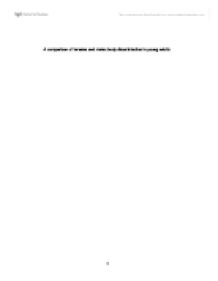 A comparison of females and males body dissatisfaction in young adults.

A comparison of females and males body dissatisfaction in young adults.

The present study was to replicate the findings of Fallon and Rozin’s (1985) study.

Using Fallon and Rozin’s (1985) figure scale, ranging from 1 to 9, 1 = very thin, 9 = very heavy, 30 female and 30 male participants from an online psychology website participated in a questionnaire based on the above figure scale drawings indicated their current figure, their ideal figure, and the figure they found most attractive in the opposite sex. Females current figures are heavier than their ideal figures and heavier than the figures males reported most attractive, and males current figures are thinner than their ideal and thinner than females reported was the most attractive. Both sexes reported a degree of body dissatisfaction, females preferring to be thinner and males preferring to be larger. The differences that are reported coincide with that of Fallon and Rozin (1985) study, that females have a higher degree of body dissatisfaction than males.

This study aimed to replicate Fallon and Rozin’s (1985) findings of gender differences in body dissatisfaction in participants with an average age of 21 years.

Most of the concern with body shape and body dissatisfaction is much more common in females than in males. Researches have

Females current, ideal and other attractive*

In sum, the results of this report support that of Fallon and Rozin (1985) study of females preferring a thinner ideal figure and males preferring a heavier ideal, than what the opposite sex finds most attractive. Particularly in females, this may increase the pressures put on them to become thinner than what is healthy and produce adverse affects on their physical and emotional well being.

Abell, S.C., & Richards, M.H. (1996). The relationship between body shape satisfaction and self-esteem: An investigation of gender and class differences. Journal of Youth and Adolescence, 25, 691-703.

Brownell, K.D. (1991). Dieting and the search for the perfect Body: Where physiology and culture collide. Behaviour Therapy, 22, 1-12.

gender, and relationship with self-esteem. Personality and Individual Differences, 13, 39-43.