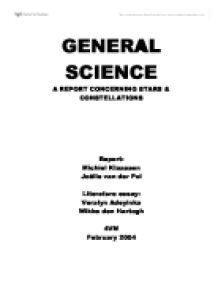 A report concerning stars and constellations 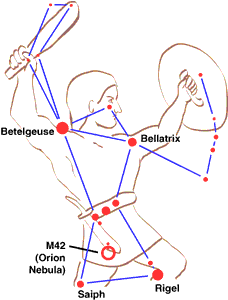 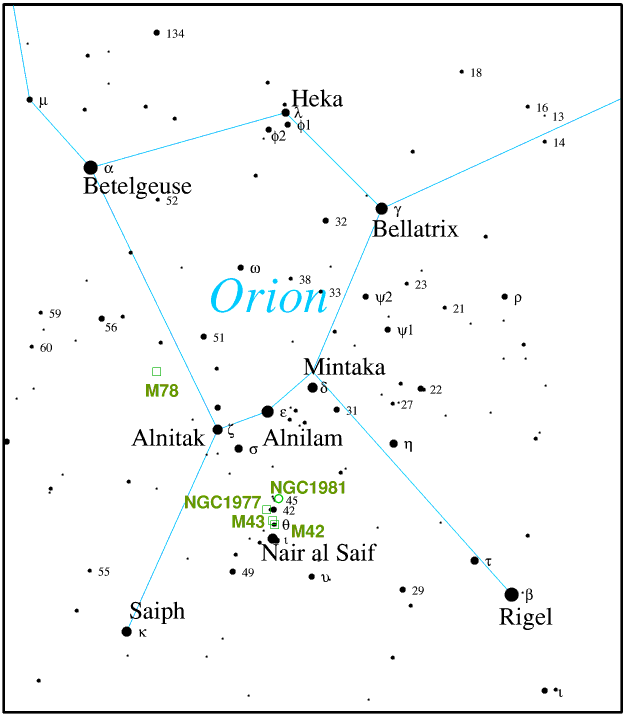 “ Orion is the master of the winter skies. He lords over the heavens from late fall to early spring, with his hunting dog Sirius trailing at his feet. “

The mythic tales of Orion go as far back as the Hittites, who flourished from the Second Millennium BC to around 1200 BC.

One story from this culture account of Orion's death. Here he is called Aqhat, and was a handsome and famous hunter. The Battle-Goddess Anat fell in love with Aqhat, but when he refused to lend her his bow, she sent another man to steal it. This man failed to do it, and wound up killing Aqhat and dropping the bow into the sea. This is said to explain the astronomical fact that Orion and the Bow (an older version of the constellation) drops below the horizon for two months every spring.

Finding Orion should be no problem. Its stars are some of the most familiar in all the heavens. There are three bright stars which make up the belt of Orion. From west to east the stars are called Mintaka, Alnilam, and Alnitak. Even the Bible makes reference to this famous group. God, while pointing out how all-powerful he was, is purported to have asked Job if he (Job)

Leo is a fairly compact constellation and, unlike so many other constellations, it is readily recognisable. Alpha Leonis is named "Regulus" because it was seen as the Heaven's Guardian, one who regulated all things in the heavens. While the name Regulus was given by Copernicus, the star was better known in antiquity as Cor Leonis, the Lion's Heart. 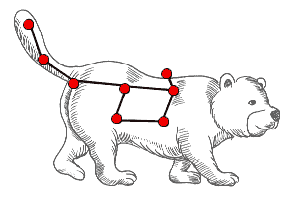 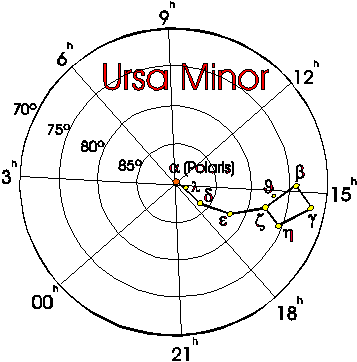 Ursa Minor is a fainter version of the Big Dipper (or Plough, in the UK), and is home to the North Star.

The constellation dates from antiquity, and is said to have been introduced by the Greek philosopher Thales around 600 BC.

For as long as ships have sailed the seas Polaris has been an essential guiding star.

However the Pole Star isn't, as one might think, constant, but rather it changes gradually through several thousands of years. The earth's axis moves very slowly, like a top, completing a circular path every 25,800 years. During this "processional cycle" several stars take turns becoming the Pole Star. I’ll discuss more of this in the course of this report.

Traditionally amateur astronomers have used the constellation as a rough guide on the clarity of the evening's sky. The stars range from second magnitude down to fifth (and even sixth); if these latter stars are clearly seen, it's a good night for viewing.

When a star is moving towards are solar system it will appear more blue then usual. And of course when a star is moving away from our sun it will appear redder. If a star is further away, the redshift or blueshift is bigger. This means that stars which are very far away move faster then the stars that our closer to the earth. The stars, which are very far away and because of that, are moving very fast can’t be seen without the help of a telescope. The stars in our constellations aren’t that far away.

When the constellations were made up, they were formed by stars and by star formations, which could be easily recognized. So the stars, which can only be seen with a telescope, weren’t included. This means that the stars in the constellations are ‘close’ to the earth. And when they are close to the earth, they are not moving as fast as the stars, which are further away. Of course they are moving but not so drastically that the formations go through radical changes. Our star formations will stay the same for a couple of thousand years.

Unfortunately the candidate has not written an introduction, they simply start off with the main information for the essay, which can be confusing when you first look at it. An introduction sets the tone of the essay and gives you ...

Unfortunately the candidate has not written an introduction, they simply start off with the main information for the essay, which can be confusing when you first look at it. An introduction sets the tone of the essay and gives you a chance to engage the reader. You should also state the topics you plan to discuss so that the purpose of your essay is clear. That said the candidates response to the set topic is fairly explicit, they have given a great deal of information regarding several different constellations. In addition to this they have provided suitable images and additional information relating to the names and myths of the constellations mentioned. The use of images for this piece of writing is appropriate as it helps the reader visualise the different constellations, images can also make an essay more interesting to read.

The candidate has clearly undergone independent research in order to provide additional information related to their chosen constellations. This shows the candidates interest in their subject and demonstrates a wider depth of knowledge. However some of the information they have included has simply been copied and pasted from a web source. I highly discourage against this, your teacher/examiner is interested in what you have to say about the topic, if you use sources for research then take the time to write out the information in your own words. Furthermore this piece of writing could have been improved by bringing together different topics within physics, such as the formation and life cycle of stars, which again would show a greater understanding of physics. Finally, though the candidate concludes their work, they have only written a brief paragraph. A good conclusion should summarise your key points and ideas and include a personal response as this can help to draw the essay to a close and leave the reader with a good impression of your work.

Though the candidate shows a reasonably good understanding of the topics discussed, they use very few technical terms and their language is sometimes colloquial, when writing a scientific essay a formal approach is more appropriate. In addition to this there are a few issues with spelling, for example the candidate has spelt the word ‘recognized’ with a ‘z’ which is the American version of the spelling, the British version should have an ‘s’.