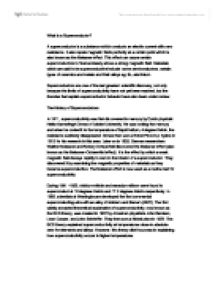 A superconductor is a substance which conducts an electric current with zero resistance. It also repels magnetic fields perfectly at a certain point which is also known as the Meissner effect.

What is a Superconductor?

A superconductor is a substance which conducts an electric current with zero resistance. It also repels magnetic fields perfectly at a certain point which is also known as the Meissner effect. This effect can cause certain superconductors to float endlessly above a strong magnetic field. Materials which are said to be superconductive include: some semiconductors, certain types of ceramics and metals and their alloys eg. tin, aluminium.

Superconductors are one of the last greatest scientific discovery, not only because the limits of superconductivity have not yet been reached, but the theories that explain superconductor behavior have also been under review.

The History of Superconductors

In 1911, superconductivity was first discovered in mercury by Dutch physicist Heike Kamerlingh Onnes of Leiden University. He was cooling the mercury and when he cooled it to the temperature of liquid helium, 4 degree Kelvin, the resistance suddenly disappeared. Onnes then won a Nobel Price in physics in 1913 for his research in this area. Later on in 1933, German researchers Walther Meissner and Robery Ochsenfeld discovered the Meissner effect (also known as the Meissner-Ochsenfeld effect). It is the effect by which a weak magnetic field decays rapidly to zero in the interior of a superconductor.

Brian D. Josephson, a graduate student from Cambridge University, predicted that electrical currrent would flow between 2 superconducting materials even when they are seperated by a non-superconductor or insulator. His prediction, once confirmed, then won him a Nobel Prize in Physics in 1973. This appearence is now known as the "Josephson effect" and is often applied to electronic devices eg. squid.

In 1986, Alex Muller and Georg Bednorz, researchers at the IBM research Laboratory in Ruschlikon, Switzerland, created a brittle ceramic compound that supercouducted at the highest temperature 30 degrees Kelvin. Ceramics are normally insulators and therefore, researchers did not consider ceramics as possible high temperature superconductors. However, Muller and Bednorz's discovery had entriged the researchers around the world to begin their research in high temperature conductors. Later, in January 1987, a research team at the University of Alabama-Huntsville achieved an impressive 92 degrees Kelvin. A material had been found that would superconduct at temperatures warmer than liquid nitrogen. The world record of 138 degrees Kelvin is now held by a thallium-doped, mercuric-cuprate comprised of the elements Mercury, Thallium, Barium, Calcium, Copper and Oxygen.

In these recent years, many discoveries about superconductivity have been made.

Moreover, the Type I superconductors have been of limited practical usefulness because the critical magnetic fields are so small and the superconducting state disappears suddenly at that temperature.