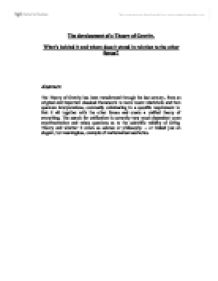 The development of a Theory of Gravity.

What’s behind it and where does it stand in relation to the other forces?

The Theory of Gravity has been transformed through the last century, from an original and important classical framework to more recent relativistic and then quantum interpretations, eventually culminating in a specific requirement to link it all together with the other forces and create a unified theory of everything. The search for unification is currently very much dependent upon experimentation and raises questions as to the scientific validity of String Theory and whether it exists as science or philosophy – or indeed just an elegant, but meaningless, example of mathematical aesthetics.

The ultimate goal for physicists is to devise a unified theory, which describes the universe all in one go. However, this proves difficult – there are partial theories which do not fit together, each predicting a limiting number of observations and neglecting others. Nevertheless the Standard Model exists as a framework for the coming together of partial theories.

1.1 The Basics of the Standard Model

In matter there appears to be four basic forces at work. Gravity is the weakest of the four but acts over great distances, binding stars and galaxies together. The electromagnetic force is stronger and is responsible for holding atoms and molecules together. As with gravity, its range is infinite. The weak force and strong force are, by contrast, limited in range, and operate only within the dimensions typical of an atomic nucleus. The weak force causes certain forms of radioactivity and underlies the nuclear fission reactions in the Sun. The strong force binds quarks and antiquarks together within the particles we observe.

3.2.3 Gravitational Waves and their Detection

A stationary object in a pool of water will not make waves. But an object spinning and splashing will create waves rippling away from it. Someone who observes them reaching the other end of the pool could deduce that a disturbance had occurred in the water, and might even be able to tell what produced the waves.

In much the same way, the movement of massive bodies in the cosmos is thought to generate ripples in the fabric of space-time, which are called gravitational waves. Detecting those waves will enable physicists to infer information about the phenomena that caused them.

Pairs of incredibly dense neutron stars (with a mass 2 or 3 times that of the sun compressed into a 10km diameter) swinging around each other 100 or even 1000 times a second  “churn up” space-time. This is also the case with stars swirling down into black holes and the formation or collision of black holes. They are all thought to generate gravitational waves, propagating outward across space-time at the speed of light. As of yet no gravitational waves have been detected as the focus has been upon making the machine sufficiently sensitive. The Big Bang should have produced the hugest of all gravitational waves, and with the right instrument, physicists ought to be able to detect them. 2, 6

See appendix for methods of detection.

Despite above factors proving the theory of general relativity to be correct, it still falls apart at the heart of a black hole, or indeed in the Big Bang – when all matter was condensed into an infinitely small space.

Quantum mechanics was formulated by Heinsenberg, Dirac and Schrödinger in the 1920s to reformulate Newton’s approach.

Based on current models of astronomical events, and the predictions of the general theory of relativity, gravitational waves that originate tens of millions of light years from Earth are expected to distort the 4 kilometre mirror spacing by about 10−18 m, less than one-thousandth the diameter of a proton.7

To complement the ground based inferometer LIGO, the Laser Interferometer Space Antenna (LISA) will be launched in 2012. LISA will be the first space-based gravitational wave observatory – its “arms” will be five million km long, a size impossible for a ground-based instrument. It is therefore sensitive to much longer wavelengths and lower frequencies than the LIGO. The interferometer will be created by linking three spacecraft which are 5 million km apart, by lasers in a equilateral triangle An interference pattern will be caused at detectors on each spacecraft from the two lasers it receives – changes in this interference pattern would be a sign of gravitational waves disrupting the alignment of the spacecraft. LISA will be able to measure changes in the laser separation down to as little as 10 picometers, which is about 1/10 the diameter of an atom. 8