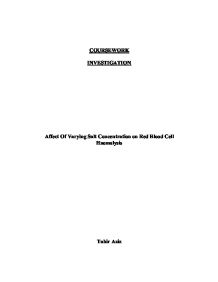 COURSEWORK INVESTIGATION Affect Of Varying Salt Concentration on Red Blood Cell Haemolysis Tahir Aziz CONTENTS > Plan > Outline method > Key variables > Risk assessment > Preliminary results > Method > Results of control experiments > Results > Conclusions > Main trends and patterns > Explanation of results > Experimental limitations Affect Of Varying Salt Concentration on Red Blood Cell Haemolysis Abstract The average adult has about five litres of blood living inside of their body, coursing through their vessels, delivering essential elements, and removing harmful wastes. Without blood, the human body would stop working. Blood is the fluid of life, transporting oxygen from the lungs to body tissue and carbon dioxide from body tissue to the lungs. Blood is the fluid of growth, transporting nourishment from digestion and hormones from glands throughout the body. Blood is the fluid of health, transporting disease fighting substances to the tissue and waste to the kidneys. Because it contains living cells, blood is alive. Red blood cells and white blood cells are responsible for nourishing and cleansing the body. Since the cells are alive, they too need nourishment. Vitamins and Minerals keep the blood healthy. The blood cells have a definite life cycle, just as all living organisms do. Approximately 55 percent of blood is plasma, a straw-collared clear liquid. The liquid plasma carries the solid cells and the platelets, which help blood clot. Without blood platelets, you would bleed to death. Haemolysis is a term used to describe the release of intracellular components from erythrocytes into the extra cellular fluid (plasma). Red blood cells are flattened, biconcave discs and have a partially permeable membrane, which allows substances such as water molecules to move through freely by osmosis. ...read more.

As soon as the 1,800 seconds were completed the first sample from the 0.0% solution was transferred to a clean cuvette, the colorimeter was zeroed using a blank cuvette containing distilled water only and the cuvette containing the sample from the 0.0% solution was placed in the colorimeter and an absorbance value taken and recorded. This was repeated for all the solutions containing varying concentration of sodium chloride and 0.1cm3 of blood, each sample was placed in a clean dry cuvette and colorimeter zeroed before obtaining the absorbance reading this was to avoid any mistakes. Once all the absorbance values had been obtained the test was repeated a further two times so I could take an average of the absorbance values. The values were recorded in a results table and the mean calculated, once I had calculated the mean a graph was produced. As a control experiment I set up one test tube containing no sodium chloride. Risk assessment This experiment is low risk; there are no toxic or harmful chemicals to be used. Despite using non-risk chemicals sensible precautions need to be taken during the experiment. This includes wearing gloves when handling blood sample as well as safety goggles and lab coats. Also any practical work needs to be carried out in a space where there is plenty of room to work safely without the risk of spillage of samples. If spillage of blood sample occurs, workbench is to be cleaned immediately using disinfectant Variables Independent variables I will be varying the concentration of the sodium chloride solution that I will be putting into individual test tubes during the period of 1800 seconds The sodium chloride solution will be range from 0 % - 1.0 %. ...read more.

Haemolysis Experimental Limitations. The most important experimental limitation was the freshness of the blood sample, when blood has been removed from its source it begins to breakdown and haemolysis occurs naturally. Although the sample I was given was said to be a fresh sample there would have been cells within the sample which had already haemolysed. Taking this into account although my results support my hypothesis I am not very confident that the results obtained were as accurate as they could have been. Clearly further repeat results would have provided me with more accurate results however I believe an experiment such as this should be carried using a different method, the method which I believe should be used is one where a haemocytometer is used, a small volume of the solution could be pipette onto a slide and the number of cells visible counted. Although this is a time consuming process the results obtained would be a lot more accurate. Centrifuging the blood samples would have also been a better way of carrying out this experiment, as I was measuring percentage absorbance (turbidity) this is not always as accurate as the results should be. Overall this investigation did provide me with evidence that supports my initial hypothesis that decreasing sodium chloride concentration increases haemolysis. The importance of maintaining a concentration as close as possible to 0.9% is vital to lead a healthy life, if the concentration with the plasma begins to decrease this could be life threatening as red cells haemolyse the oxygen carrying capacity of the red cells would be reduced, this would have a knock on affect to the entire body as the demand for oxygen is not being met. Also if the concentration of sodium chloride increases this can result in the biconcave shape of red cells being lost reducing surface area of red blood cell. ...read more.

A very good investigation on sodium chloride concentration and red blood cell haemolysis. The write up is comprehensive and well thought out, although the lack of graph work reduces the strength of the analysis. Anomalous results are identified and discussed giving valid reasons for them.
4 stars.