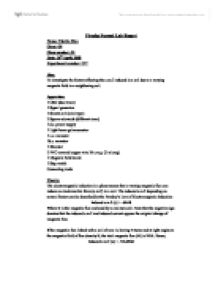 Aim: To investigate the factors affecting the e.m.f. induced in a coil due to a varying magnetic field in a neighboring coil.

To investigate the factors affecting the e.m.f. induced in a coil due to a varying magnetic field in a neighboring coil.

The electromagnetic induction is a phenomenon that a varying magnetic flux can induce an electromotive force (e.m.f.) in a coil. The induced e.m.f. depending on several factors can be described by the Faraday’s Law of Electromagnetic Induction:

Where Φ is the magnetic flux enclosed by a one-turn-coil. Note that the negative sign denotes that the induced e.m.f. and induced current oppose the original change of magnetic flux.

A. Rate of change of magnetic flux

B. Number of turns of coil

From the results in steps 23 and 25 in Part E, it can be concluded that the induced e.m.f. is directly proportional to the rate of change of magnetic flux, i.e. a steady induced e.m.f. will result in a steady rate of change of magnetic flux.The solenoids are placed perpendicular to each other because this ensures that the magnetic field produced in each of the solenoids is not affected by that in the neighboring solenoids.Sources of error:

-There is reaction time of an individual.

-A stopwatch which is fast.

-The surrounding magnetic field of the neighboring solenoids may affect the experimental result.

-The setting and calibration of the CRO is wrong.

-Repeat the experiment several times and take the average data for calculation.

-The time measured by a stopwatch is checked using another watch.

-Place the neighboring solenoids perpendicular to each other.

-Reset the setting and calibration of the CRO.

From the experiment, it is observed that the factors affecting the e.m.f. induced in a coil due to a varying magnetic field in a neighboring coil are the rate of change of magnetic flux, the number of turns of coil and the cross-sectional area of coil.