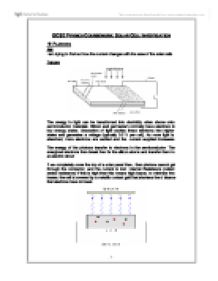 AimI am trying to find out how the current changes with the area of the solar cells.

I am trying to find out how the current changes with the area of the solar cells. 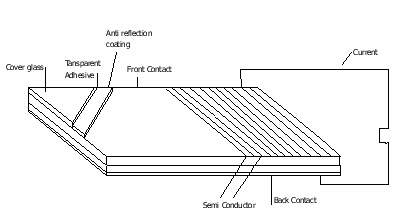 The energy in light can be transformed into electricity when shone onto semiconductor materials. Silicon and germanium normally have electrons in low energy states. Absorption of light excites these electrons into higher states and generates a voltage (typically 0.5 V per cell). As more light is absorbed, more electrons are excited and the current supplied increases.

The energy of the photons transfer to electrons in the semiconductor. The energized electrons then break free for the silicon atoms and transfer them to an electric circuit

If we completely cover the top of a solar panel then, then photons cannot get through the conductor, and the current is lost. Internal Resistance (called series resistance) if this is high then this means high losses, to minimize the losses; the cell is covered by a metallic contact grid that shortens the distance that electrons have to travel. 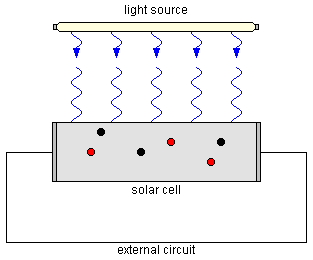 In this experiment I will only change 1 factor, which is the area of solar cell. I would have to change the card placements which I will use to cover the solar cell at the same measurements every time. I will change the length of the card each time from 100%, 75%, 50% and 25%.

The following factors that are going to be kept constant are:-

‘∑’ is a capital Greek letter (sigma). ‘∑x’ means the sum of all the terms and ‘n’ is the number of terms. I will use this formula to calculate my ‘Average current’ and for the ‘mean of graph’ (this allows me to work out the exact point where the line of best fit runs straight through).

Keeping a safe experiment is also very important for the safety of me and other people around me. To ensure that my experiment is safe, I will carry out the following precautions:-

No really problems occurred during the experiment, the only thing annoying me was the milliamp meter took time to settle on the correct milliamp, as it has a tendency to fluctuate across a range of values before stopping.

I think that my results are good enough to support the firm conclusion that as the percentage area uncovered increases; more photons will hit the semi conductor device, meaning more electrons will be released resulting in more electric current because all of the results between the three experiments were very similar showing I had reliable results.

To carry this experiment on further, the tests could be done more times to see if the averages are still the same, to see if there is a change in results if the room is completely dark i.e. so no natural light can interfere with the tests, using a more stronger or sensitive solar panel to pick up the light. I would also increase the area in smaller steps e.g. 10%, 20% because I feel I didn’t take enough results. Five results is only just enough to give me a conclusion so having more would also give me a better conclusion.

Overall, I would say the experiment turned out successful and I was very happy with the investigation and my results.