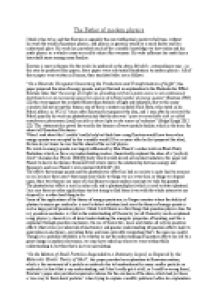 The Father of modern physics

I think it has to be said that Einstein is arguably the most influential scientist of all time, without his work the world of quantum physics, and physics in general, would be a much darker and less understood place. His work has provoked much of the scientific knowledge we have today and has made physics as a whole a more accessible subject for everyone. His wide influence has made him a household name among many families.

“On a Heuristic Viewpoint Concerning the Production and Transformation of Light”, this paper proposed the idea of energy quanta, and put forward an explanation to the Photoelectric Effect. Einstein states that “the energy of a light ray spreading out from a point source is not continuously distributed over an increasing space but consists of a finite number of energy quanta” (Einstein 1905)[1]) this went against the accepted Maxwellian theories of light and radiation, due to this many scientists did

Many people use this theory to explain fluctuations in the stock market, they can do this because the theory behind Brownian motion is very close to being an equation which describes random motion (though naturally a perfect equation would be impossible), and fluctuations in stock market prices are very random. This being said, the very famous mathematician Benoît B. Mandelbrot argued that it couldn’t explain stock market fluctuations, for Brownian motion to explain the stock market several assumptions about the variation in stock price would have to be made; the change in price of shares would have to be independent of previous changes in the stock price, that the factors affecting change in stock prices remain the same and that prices changes follow the proportions of a normal distribution. Unfortunately in reality Mandelbrot states that “life is more complex” and that these three assumptions are not met in the real world, so Brownian motion cannot therefore be used to predict or explain fluctuations in stock price (Mandelbrot 2004 [4]).

“On the Electrodynamics of Moving Bodies”. This is where things really get interesting, the theories proposed in this paper later become known as Einstein’s “special theory of relativity” and this paper explains how

A spring's mass increases whenever it is put into compression or tension. Its added mass arises from the added potential energy stored within it;

The worlds official standard mass for the kilogram, made of platinum/iridium, will undergo a change in mass of 1.5 picograms (1 picograms is equivalent to 1x10^-20 grams) if it’s temperature is raised 1 degree;

The Earth itself is more massive due to its daily rotation, than it would be with no rotation. This rotational energy {2.14 x 10^29 J (Infranetlab 2008 [9])} represents 2.38 billion metric tons of added mass.

He also published many other papers and wrote many books too, but there isn’t the time nor the words left to go into them, I will just add that as well as his love for physics, Einstein also dabbled in philosophy, as many theoretical physicist do, and wrote a few books on it, this rewarded him with an honourary degree in philosophy. Einstein was one of the leading figures in the World Government Movement and was offered the Presidency of Israel after WWII had ended, he declined it however. I would assume that this was for political reasons, he was a pacifist, and was against the use of atomic weapons, which the American’s used on Japan in 1945 [10].

Personally I find Einstein’s theories fascinating, and inciting of much thought. They challenge the understanding and extend the knowledge of the surrounding world.

There has been a lot of effort into this piece and clearly a great deal of, albeit uncited, background reading. The detail is great and there seems to be generally good understanding behind it but this essay would be a ...

There has been a lot of effort into this piece and clearly a great deal of, albeit uncited, background reading. The detail is great and there seems to be generally good understanding behind it but this essay would be a lot better if the writer compared Einstein with some of his contemporaries. If this were the case it would be possible to judge if he really was the father of modern physics, compared to other physicists. This could also be improved by writing a clearer introduction with a more specific question to answer and not clouding it with personal judgements so early on.

The analysis, though generally good requires more comparison between scientists as previously stated and could deal with the people that Einstein's works rely upon as well in more detail.

The writing is mixed. Although generally it is fairly good, there are asides, usually bracketed, that are far too informal and should not be included. The commentary in this case is distracting and unhelpful.