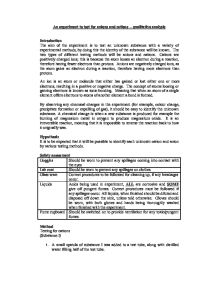 an experiement to test for anions and cations

An experiment to test for anions and cations - qualitative analysis Introduction The aim of the experiment is to test an unknown substance with a variety of experimental methods, by doing this the identity of the substance will be known. The two types of different testing methods will be anions and cations. Cations are positively charged ions; this is because the atom looses an electron during a reaction, therefore having fewer electrons than protons. Anions are negatively charged ions, as the atom gains an electron during a reaction, therefore having more electrons than protons. An ion is an atom or molecule that either has gained or lost either one or more electrons, resulting in a positive or negative charge. The concept of atoms loosing or gaining electrons is known as ionic bonding. Meaning that when an atom of a single element offers electrons to atoms of another element a bond is formed. By observing any chemical changes in the experiment (for example, colour change, precipitate formation or expelling of gas), it should be easy to identify the unknown substance. A chemical change is when a new substance is produced for example the burning of magnesium metal in oxygen to produce magnesium oxide. ...read more.

Evaluation If the experiment was to be repeated again I would carry out further practise tests when testing for nitrate. As when I previously tested for this substance, I didn't have the technique right and didn't know what the end result would look like. When using the flame test for testing cations, it was difficult to note any colour change in the flame, to identify the unknown substance; this was because there wasn't enough of the unknown substance on the nichrome wire. A change that I would implement if the experiment was to be carried out again, would be for a spatula type/small spoon, with a wooden or glass handle (to prevent any burns) to be used with a small amount of the unknown substance on the end, that way, it would be much clearer to detect a colour change when using the flame test method. When testing for anions, it was difficult to identify whether the unknown substance was giving off a gas or was dissolving. Again, this technique would need to be practised several times, in order to be clear on the end result, and to ensure that the experiment ran smoothly. Reference/research: http://library.thinkquest.org/19957/matter/atomionmolecbody.html (viewed 26/01/09) http://en.wikipedia.org/wiki/Ion (viewed 26/01/09) http://chemistry.about.com/ (viewed 26/01/09) http://dictionary.com (viewed 26/01/09) ...read more.