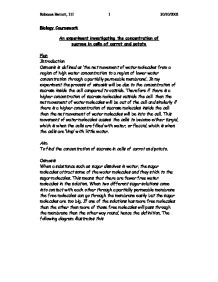 * The group of specimen tubes will be put in the fridge, so that they are kept at a constant temperature and away from the dangers of microbes, at the same time and retrieved 24 hours later. * After 24 hours, the cylinders will be taken out * The cylinders will be blotted using a piece of tissue paper laid on the scale, and will then be weighed using a scale to the nearest 0.01g. * A note will be made of the mass of each and which concentration of sucrose it was from. * The results will be recorded and the averages and percentage increase worked out because percentage increase is the most accurate way of measuring a difference in mass as the masses were not all the same at the beginning. Here is a list of the equipment which I will use for each experiment: * Three cylinders of either carrot or potato * A specimen tube * 20cm3 of the desired concentration of sucrose solution * A pipette * A measuring cylinder * A label * A size 2 cork borer * A knife * A tile All together I will have used one of each of the above apart from * 10 specimen tubes, one for each separate experiment. * 15 potato cylinders, three for each of the five potato experiments. * 15 carrot cylinders, three for each of the five carrot experiments. * 10 labels, one for each specimen tube. Fair Test As I only want to take measurements of the change in mass of the cylinders in accordance to different concentrations of sucrose solutions, all other factors must be kept constant. This means that I will have to make sure that the amount of sucrose concentration will always be 20cm3, measured with a pipette and a measuring cylinder. I have to take care cutting out the cylinders so that none of the vegetable skin is left on as it is waterproof and would prevent osmosis from occurring. ...read more.

It is also possible that the concentrations of sucrose were mixed up slightly imprecisely, as that was also done by a human being. However I do believe that if anything then it is because different parts of the potatoes and carrots grew differently and of course I had to use more than one potato and carrot and they had different concentration of solutes within their cells. Although I tried to overcome this factor by using potatoes and carrots of the same brands each and every carrot and potato is slightly different from the next. It is also possible that I left some small pieces of skin around the potato, which means at that particular point no water can be absorbed. This results in that particular potato cylinder absorbing less water, hence less osmosis occurring than in another place. This would also create an artificially low reading for than particular potato cylinder. If I were to try and improve on this experiment, I would have to use more cylinders because then I would gain a more accurate and reliable average. Also I could use more concentrations of sucrose, perhaps 0.0M, 0.1M, 0.2M etc. This would enable me to plot a more accurate graph as well and therefore get a more precise measurement for the point of incipient plasmolysis. If I were able to do further investigations into osmosis, I would like to experiment with the factors that effect osmosis, for example the length of the membrane and the temperature of the water. In order to test one of these I would have to keep the concentration of the sucrose solution constant and have one of the above as the variable. I am particularly interested in this because I feel I have only done a part of a bigger experiment; I have only tested one of the factors so far which is the concentration of the solution. Rebecca Barnett, 11I 1 30/10/2002 ...read more.