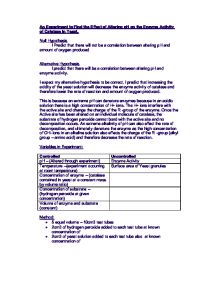 An Experiment to Find the Effect of Altering pH on the Enzyme Activity of Catalase in Yeast.

An Experiment to Find the Effect of Altering pH on the Enzyme Activity of Catalase in Yeast. Null Hypothesis I Predict that there will not be a correlation between altering pH and amount of oxygen produced Alternative Hypothesis I predict that there will be a correlation between altering pH and enzyme activity. I expect my alternative hypothesis to be correct. I predict that increasing the acidity of the yeast solution will decrease the enzyme activity of catalase and therefore lower the rate of reaction and amount of oxygen produced. This is because an extreme pH can denature enzymes because in an acidic solution there is a high concentration of H+ ions. The H+ ions interfere with the active site and change the charge of the R-group of the enzyme. Once the Active site has been altered on an individual molecule of catalase, the substrate of hydrogen peroxide cannot bond with the active site and no decomposition occurs. An extreme alkalinity of pH can also effect the rate of decomposition, and ultimately denature the enzyme as the high concentration of OH- ions in an alkaline solution also effects the charge of the R-group (alkyl group - amino acid) ...read more.

Instead of giving 28mm, I estimate 35mm to be more conclusive. pH5 in the first attempt was high in relation to the received results for every other attempt. Conclusion The alternative hypothesis was proved correct, with increasing pH an increasing amount of oxygen was produced. Explanation of Conclusion If I exclude the anomalous result of pH6, I have found that the enzyme catalase favours and alkali pH for maximum rate of activity. The optimum pH for catalase is pH8. The rate of activity decreases with decreasing pH as explained in the hypothesis; the high concentration of H+ ions in the solution act to denature the enzyme at very low pHs but begin to effect the active site and change its shape. This is because the attraction between substrate and enzyme is often a result of small electric charges at the active site, and these are disrupted by changes in H+ ion concentration. The high concentration also changes the charge on the alkyl group meaning the substrate cannot fit into the active site according to the 'lock and key' theory of enzyme activity: With increasing pH, the more alkali the buffer solution added to the yeast, the higher the concentration of OH- ions which also change the charge on the R-group and change the shape of the active site. ...read more.

Repeating the experiment to smaller and larger time intervals may increase validity of results, e.g. 60seconds and 230 seconds. During this experiment the effect of pH on the enzyme catalase was overall successful, all controllable variables excluding pH were kept constant. Increasing the ratio of yeast to hydrogen peroxide would alter results as altering enzyme and substrate concentration effects the rate of reaction. If repeated again, changing the concentrations also may show more conclusive results as having the enzyme in excess would give an optimum reaction rate and therefore more accurate results. The surrounding of the experiment were open, meaning more oxygen than necessary could diffuse into the atmosphere. Repeating the experiment in closed surrounds would eliminate marginal error to improve results. This was unfortunately not realistically possible. Care was taken to avoid contamination of apparatus, but sterilised, different apparatus for each repetition would insure more accurate readings. Safety was taken into account, and care was taken when handling the substrate and enzyme solution. The experiment was overall successful, although slightly inconclusive, since the optimum pH was established as pH8, even though this was not the highest pH used in the experiment. Overall the results were accurate, in relation to the variability of components used in the experiment. I proved my alternative hypothesis be correct. ...read more.