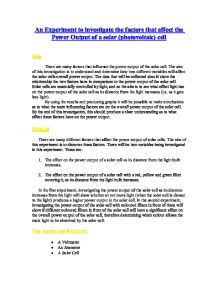 An Experiment to investigate the factors that affect the Power Output of a solar (photovoltaic) cell.

My tie often came in between the light and the solar cell, and people were walking around frequently in the room, so that may have had a significant effect on the light rays reaching the solar cell, and therefore on the overall power output of the solar cell. Time was limited in doing this experiment, so therefore it had to be carried out at a fairly rapid pace. The current and voltage displayed on the ammeter and voltmeter often changed after a while. Another way to improve this experiment would therefore be to keep the solar cell at each distance from the bulb for a few minutes, while the readings on the voltmeter and ammeter settle down. This would provide more accurate results. In this investigation, I began my measurements from 0cm and moved on until I reached 100cm. However, to improve my results, I would start from 100cm and move down to 0cm. This is because at 0cm, the voltage and the current is the highest, and so this may have had an effect on the power output throughout the entire experiment. It is better to start from by getting a low power output and watch it increase. To Expand This Investigation: Although this was a comprehendible and accurate investigation, it did not cover every aspect of measuring how the power output of a solar cell is affected. More experiments can be done to create a better understanding of what factors really do affect the power output. To extend this experiment, solar cells of different sizes could be used to see how their size or surface area is related to their power output. Different types of solar cells could be used. The angle of the light source in front of the solar cell could be altered. A bigger light source could be used. The distance of the solar cell from the light bulb could be increased, i.e. in this experiment I only took measurements up till 1 meter away from the bulb, so I could take measurements up to about 2 or 3 meters for more accurate results. ...read more.