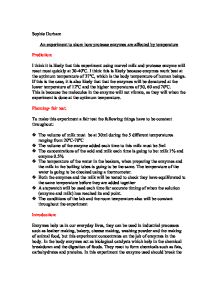 An experiment to show how protease enzymes are affected by temperature

Sophie Durham An experiment to show how protease enzymes are affected by temperature Prediction: I think it is likely that this experiment using marvel milk and protease enzyme will react most quickly at 30-40�C. I think this is likely because enzymes work best at the optimum temperature of 37�C, which is the body temperature of human beings. If this is the case, it is also likely that that the enzymes will be denatured at the lower temperature of 12�C and the higher temperatures of 50, 60 and 70�C. This is because the molecules in the enzyme will not vibrate, as they will when the experiment is done at the optimum temperature. Planning- fair test: To make this experiment a fair test the following things have to be constant throughout: * The volume of milk must be at 30ml during the 5 different temperatures ranging from 20�C-70�C * The volume of the enzyme added each time to this milk must be 5ml * The concentrations of the acid and milk each time is going to be: milk 1% and enzyme 0.5% * The temperature of the water in the beakers, when preparing the enzymes and the milk in the boiling tubes is going to be the same. ...read more.

Improvements could have been made to the experiment. We could have had more time because towards the end of the experiment out time was limited and we had to rush to finish. With a longer time span not only could we have done the experiments more extensively, but also more accurately. We could have changed the concentrations of the milk and the enzymes, to see if that made a difference to the results. From what I have found out from this experiment it is likely that the higher the concentration of the enzyme, the quicker the reaction will take place, and the higher the concentration of the milk slower the reaction would take place. This experiment is also controversial. Different groups participating in the experiment stopped and recorded their results at different times. This doesn't really make the experiment fair because there was different levels of clearness used. We waited to record the times until each tube had gone completely clear. We could have done a control experiment to prove that the marvel milk needs protease enzymes to work. We should also have used one stopwatch between all groups so we all had an accurate timing. We could have even tried using a different enzyme, to prove the theory that the enzyme we used works at slightly higher temperature then that of a normal enzyme. ...read more.