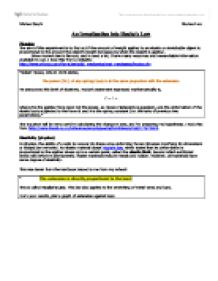 An Investigation into Hooke's Law - The aim of this experiment is to find out if the amount of weight applied to an elastic or stretchable object is proportional to the amount the object's length increases by when the weight is applied.

An Investigation into Hooke’s Law

The aim of this experiment is to find out if the amount of weight applied to an elastic or stretchable object is proportional to the amount the object’s length increases by when the weight is applied.

Since Hooke’s law is famous, and is used a lot, I have many resources and researchable information available to use. I took this from a website; http://www.efunda.com/formulae/solid_mechanics/mat_mechanics/hooke.cfm

The power (Sic.) of any springy body is in the same proportion with the extension.

He announced the birth of elasticity. Hooke's statement expressed mathematically is,

where F is the applied force (and not the power, as Hooke mistakenly suggested), u is the deformation of the elastic body subjected to the force F, and k is the spring constant (i.e. the ratio of previous two parameters).”

The equation will be very useful in calculating the change in size, and for preparing my hypothesis. I took this from http://www.tiscali.co.uk/reference/encyclopaedia/hutchinson/m0021767.html.

These are the equipment pieces id need to use: 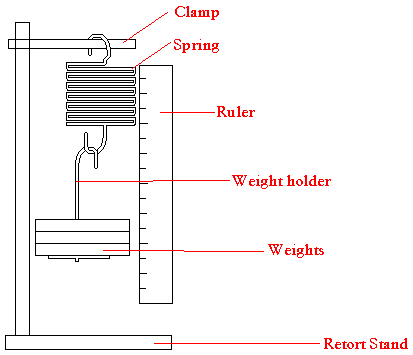 As a safety precaution I will ensure the spring is not stretched so much it could fly off and injure someone’s eye.

I predict that I will find that the more weight that is added, the greater the extension of the spring will be. The change in weight will be proportional to the change in the length of the spring. I think this will happen because the greater the mass (measured in Kilograms, or Kg for short) an object has the greater the weight (measured in Newton’s, or N for short) it will have. The force of gravity pulls the object toward the ground with greater force and speed the greater the mass it has. If an object is attached to an elastic or stretchable object, and left to hang freely, it will be pulled toward the Earth’s centre of gravity.

I could make the experiment more reliable by making sure the spring was not moving or vibrating in any way during measuring. I could make sure I measured from the same angle (as close as I can get to the same angle each time) to rule out parallax errors. I would make sure that the measuring device was intact, calibrated correctly and/or straight before use. I would also ensure that my spring was not damaged in any way, with the use of a magnifying glass or other enhanced viewing apparatus. I did not encounter any anomalous results in this experiment.

To gain further knowledge and evidence for Hooke’s law, an experiment where multiple springs are used, and elastic bodies made from different materials than metal, for example, an elastic band are used to see if Hooke’s law works in differing circumstances.