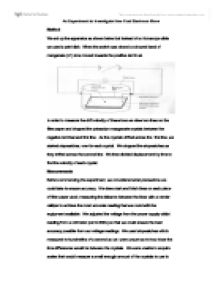 An Investigation into how electrons move

An Experiment to Investigate How Fast Electrons Move

We set up the apparatus as shown below but instead of a microscope slide we used a petri dish.  When the switch was closed a coloured band of manganate (VII) ions moved towards the positive terminal.

In order to measure the drift velocity of these ions we drew two lines on the filter paper and dropped the potassium manganate crystals between the negative terminal and first line.  As the crystals drifted across the first line, we started stopwatches, one for each crystal.  We stopped the stopwatches as they drifted across the second line.  We then divided displacement by time to find the velocity of each crystal.

Before commencing the experiment, we considered what precautions we could take to ensure accuracy.  We drew start and finish lines on each piece of filter paper used, measuring the distance between the lines with a vernier calliper to achieve the most accurate reading that we could with the equipment available.  We adjusted the voltage from the power supply whilst reading from a voltmeter (set to 600v) so that we could ensure the best accuracy possible from our voltage readings.  We used

We noted that, in general, that velocity increased with voltage.  However, our readings taken at approximately 200v (201v in this case) did not support this theory.  We decided to repeat the experiment for this voltage and obtained the following results

We noted that we had obtained similar results and we decided that our original findings should be included as a valid result for this experiment.  Our original readings and not the second readings for approximately 200v have therefore been used to draw conclusions from this experiment.

Generally we consider the drift velocity of a flow of electrons as opposed to the speed of any one particular electron.  However it is impossible to measure this.  Instead, we investigated the drift velocity of manganate (VII) ions as a comparison.  Initial observations suggest that the ions must be negatively charged, like electrons, to be attracted to the positive terminal and that they appear to move slowly although increase the voltage appears to increase the velocity.

We derive this from the knowledge that Q = I x t.  We know that in a certain amount of time, Q will pass through all points in the wire

We can calculate the distance that this electron moves in the same amount of time by using the equation distance = speed x time, so all electrons in a length of wire will pass through all points in the wire so

And dividing both sides by t gives

However, since we are measuring the drift velocity of coloured ions through a medium, we cannot use this equation.  We therefore decided to plot a graph of average velocity against voltage to see if there was a linear relationship i.e. v = kV (Graph 1), where k would be determined by the gradient of the straight line.  We noted that whilst the velocity of the ions did appear to increase as the potential difference increased, with the exception of our readings at approximately 200 volts, there was no linear relationship.  We then considered the possibility that there may be a relationship in the form v = kVª.  We therefore plotted a graph (Graph 2) of log v against log V to determine if there was a linear relationship where a would be determined by the gradient.

In conclusion, from graph 1, I have determined the gradients and therefore the relationship v=kV at varying voltages.

In order to improve the experiment I would measure the Potassium Manganate (VII) as it appeared that smaller quantities took longer than larger ones, although this could be partly due to diffusion.  I would also consider trying to keep the paper in the dish in constant contact with the circuit however this would lead to its own problems in that I would then be unable to remove and replace the filter paper.  I would also measure the current so as to calculate the resistance of the filter paper.

Despite being advised that the quantity of potassium managate (VII) used would not affect the results of the experiment, our observations suggested that larger quantities had a greater drift speed.  I would therefore suggest that an investigation into this, using the same set up as above but controlling the quantity of potassium manganate (VII) used, may be appropriate further research.  This in turn may lead to a recommendation that this experiment should be carried out again using a controlled quantity of the substance or, alternatively, validate that the varying quantities used did not affect our results.

We also noticed that varying the quantity of ammonia solution affected results.  Further research could be done into what the optimum amount of solution is for this experiment in order to improve results further and minimise errors caused by diffusion.