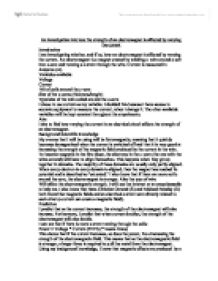 I am investigating whether, and if so, how an electromagnet is affected by varying the current. An electromagnet is a magnet created by winding a wire around a soft iron c-core and running a current through the wire. Current is measured in Amperes (A).

·N0 of coils around the c-core

Type/size of the wire coiled around the c-core

I chose to use current as my variable. I decided this because I have access to accurate equipment to measure the current, when I change it. The other available variables will be kept constant throughout the experiments.

I aim to find how varying the current in an electrical circuit affects the strength of an electromagnet.

My c-cores that I will be using will be ferromagnetic, meaning that it quickly becomes demagnetised when the current is switched off and that it is very good at increasing the strength of the magnetic field produced by the current in the wire. To become magnetic in the first place, the electrons in the c-core (the one with the wires around)

1)I will set up the apparatus as shown in the diagram below.

2)Set the current at the right amount of amps.

4)Record the force (N) and minus the weight of the c-core.

2 Soft Iron Cores in a C-shape

I will make it a fair test by keeping everything the same, apart from my variable (current). To change the current, I will need to change the resistance, which, in turn, will change the voltage (V=IR), so I will need to include a voltmeter into the circuit to make sure that the voltage can be monitored and will be easy to correct. So, the things that I am keeping constant are:

If I had extended time, I could investigate the experiments further, and get more accurate results. I would like to have done more experiments with a higher current. This would mean that I could investigate the saturation theory, and whether beyond a certain point, it does not matter how much you increase the current, the electromagnet will not get stronger. Also, I could mathematically prove my theory about the current directly affecting the electromagnets strength, due to its increase in power. I could measure the gradients of the graph to find the exact increase in strength between each measurement. It would also be useful and interesting to see whether

I would also like some extra time to do some proper research into the findings of the first people to test this investigation. It would also be interesting and useful to discover what they found.