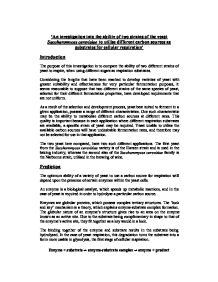 'An investigation into the ability of two strains of the yeast Saccharomyces cerevisiae to utilise different carbon sources as substrates for cellular respiration'.

'An investigation into the ability of two strains of the yeast Saccharomyces cerevisiae to utilise different carbon sources as substrates for cellular respiration' Introduction The purpose of this investigation is to compare the ability of two different strains of yeast to respire, when using different sugars as respiration substrates. Considering the lengths that have been reached to develop varieties of yeast with greater suitability and effectiveness for very particular fermentation purposes, it seems reasonable to suppose that two different strains of the same species of yeast, selected for their different fermentation properties, have developed requirements that are not uniform. As a result of the selection and development process, yeast best suited to ferment in a given application, possess a range of different characteristics. One such characteristic may be the ability to metabolise different carbon sources at different rates. This quality is important because in each application where different respiration substrates are available, a specific strain of yeast may be required. Yeast unable to utilise the available carbon sources will have undesirable fermentation rates, and therefore may not be selected for use in that application. The two yeast here compared, have two such different applications. The first yeast from the Saccharomyces cerevisiae variety is of the Hansen strain and is used in the baking industry, whereas the second also of the Saccharomyces cerevisiae family is the Narbonne strain, utilised in the brewing of wine. Prediction The optimum ability of a variety of yeast to use a carbon source for respiration will depend upon the presence of certain enzymes within the yeast cells. An enzyme is a biological catalyst, which speeds up metabolic reactions, and in the case of yeast is required in order to hydrolyse a particular carbon source. Enzymes are globular proteins, which possess complex tertiary structures. The 'lock and key' mechanism is a theory, which explains enzyme-substrate complex formation. The globular nature of an enzyme's structure gives rise to an area on the enzyme known as an active site. ...read more.

The volumes of the various liquids involved in this experiment should be measured using appropriate devices i.e. a measuring cylinder for the distilled water, a 25cm3 volumetric pipette and filler for the removal of the yeast/sugar mixture samples and a burette for titrations, etc. The incubation temperature must be controlled and maintained at a constant level (25oC), throughout the period of incubation. This should be done in order to prevent temperature change causing the rate of enzyme activity to fluctuate. The control of temperature can be achieved through the use of a thermostatically controlled incubator. The concentration of the various elements must also be controlled. The use of the same source of pre-prepared 0.1 mol dm-3 NaOH solution will ensure that the concentration cannot be a factor which will cause variation in the results, as it will be the same each time. Risk assessment The practical procedure in this investigation is of a low risk. However, the implementation around others means that in order to reduce potential risk of mistaken use, all containers should be labelled. It should be noted that the alkaline 0.1 mol dm-3 sodium hydroxide solution is considered to be a mild irritant, and so care should be taken to avoid spillage. If contact is made with skin, the affected area should be washed with cold water. If ingested or contact is made with eyes, plenty of cold water should be used to flush it out and medical advice should be sought. As with any investigation involving chemicals, safety glasses should be worn at all times. Through respiring anaerobically, the yeast will cause the medium in which it is growing to turn acidic. Although the acidity will be weak in its nature, care should still be taken in its handling. The use of glassware means there is the potential for breakage and therefore should be handled with care. Any broken glass should be cleared away thoroughly and with caution to avoid cuts. ...read more.

On this basis and with a lack of other conclusive evidence, the hypothesis stating that respiration in baking yeast is faster than in wine yeast, when glucose is used as a respiratory substrate, should be rejected. Further investigation Due to the tentative nature of single investigations, in order to realise a higher level of confidence in the eventual results obtained, further work could be carried out in this area. Through employing the mentioned amendments to the method, any future extensions to this investigation may help to establish the reliability of the method used. Further investigative work could involve the re-testing of the lactose and galactose substrates to see whether they really had an adverse influence on the respiration rate, or whether they appeared to, due to unreliability in the results of the control solutions. Another limitation of this method is that from the end results it cannot be determined to what extent the substrate had been used, or whether the rate at which it was used at different stages of the incubation period varied. It may be for example, that some of the carbon sources were only just starting to be metabolised at a reasonable rate at the end of the incubation period, giving the impression that the yeast was unable to effectively use them as respiration substrates. Another possibility may be that the majority of the respiration occurred within the first couple of hours, thereafter tailing off. By taking pH readings every half an hour throughout the incubation period, the degree of respiration at each point could be estimated and plotted on a graph. Once plotted, the accumulated data would have the potential to show at what point of incubation the respiration began to occur, when the greatest rate of respiration occurred and whether respiration had stopped by the end of the incubation period. This information would allow more accurate conclusions to be drawn regarding the respiration rates, and the ability of the yeast to respire the particular carbon sources. 1 ...read more.

This is a very detailed and well written report.
1. There are several subheadings missing.
2. The sources of information need to be referenced.
3. The tables of results are missing.
4. The analysis section is very strong.
****