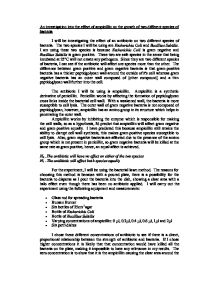 I will be investigating the effect of an antibiotic on two different species of bacteria.  The two species I will be using are Escherichia Coli and Bacillius Subtilis.  I am using these two species is because Escherichia Coli is gram negative and Bacillius Subtilis is gram positive.  These two are safe species in the sense that being incubated at 25°C will not create any pathogens.  Since they are two different species of bacteria, I can see if the antibiotic will affect one species more than the other.  The difference between gram positive and gram negative bacteria is that gram positive bacteria has a thicker peptidgolycan wall around the outside of it's cell whereas gram negative bacteria has an outer wall composed of [other compound] and a thin peptidoglycan wall further into the cell.

The antibiotic I will be using is ampicillin.  Ampicillin is a synthetic derivative of penicillin.  Penicillin works by affecting the formation of peptidoglycan cross links inside the bacterial cell wall.  With a weakened wall, the bacteria is more susceptible to cell lysis.  The outer wall of gram negative bacteria is not composed of peptidoglycan, however, ampicillin has an amino group in its structure which helps in penetrating the outer wall.

H1 – The antibiotic will affect both species equally

For the experiment, I will be using the bacterial lawn method.  The reasons for choosing this method is because with a poured plate, there is a possibility for the bacteria to disperse as I pour the bacteria into the dish, showing a clear area with a halo effect even though there has been no antibiotic applied.  I will carry out the experiment using the following equipment and measurements:

I will use sterile technique in order to prevent foreign microbes contaminating the plate before incubation as they could affect my results:

I will measure the diameter of the area three times; once along the longest distance, one across the shortest distance and another random distance and take an average of the three measurements in order to calculate a final result for that concentration of antibiotic.

The student t test is designed to show whether the experiment was statistically valid and did not occur by chance.  If the experiment has less than a 5% chance of error, then the null hypothesis is rejected in favour of another hypothesis.

The investigation was carried out as I planned except for the following changes.  Instead of repeating the experiement, I used pooled data in order to get repeat values because there was not enough time to carry out repeats of the experiement.  Applying the ampicillin onto the disc using  wicking instead of a micropipette; does not guarantee an even distribution of antibiotic, making each disc have a contain a different volume of ampicillin and affect the overall results.  The concentration I used in the investigation were also too high; if lower concentions were used, it would have decreased the amount of overlapping between zones of clearance and increased accuracy when measuring diameters.

The table of results shows pooled data I have collected, the highlighted cells being my own data.  Obvious anomalous results have been omitted seeing as they have they could negatively influence my final result and increase the percentage of error in the investigation.

My own results showed a 0 for all my Bacillus Subtilis plates and an positive correlaton between concentration and mean diameter of zones of clearance in the Escherichia Coli samples, therefore we can say that higher concentrations of ampicillin has a greater effect on bacterial replication.  The reasons for the all of the results being 0 could have been due to several possibilities.  No bacterial growth could have occurred from the glass rod used to spread the bacteria being too high a temperature, killing the bacteria on contact.  There is also the possibility that the concentration of bacteria was so thin and dilute that even the weak concentrations of ampicillin inhibited the growth of bacteria on the entire plate.  A more dilute concentration of bacteria would have probably occurred from the bottle of bacteria  not being well shaken beforehand, leaving much of the bacteria at the bottom of the bottle and resulting in none or very little being transferred onto the glass rod.

Bacterial growth decreased as ampicillin concentration increased because ampicillin acts as a competitive inhibtior against the enzyme transpeptidase which forms cross links and finalises bacterial cell wall synthesis.  A higher concentration has more ampicillin present, allowing more  enzyme inhibition to occur.  Water moves into the cytoplasm via the semi permeable cell wall using osmosis, diffusing from a less negative water potential to a more negative water potential.  Normally, with the presence of a cell wall, the cell would become turgid and not rupture due to osmotic pressure, however, after ampicillin has inhibited cell wall formation, the bacteria can no longer withstand the pressure being exerted from the water and dies due to cell lysis.  When looking at the two different species, gram positive bacteria have a much thicker peptidoglycan outer wall so the results agree with my initial hypothesis that gram positive would be more sensitive to ampicillin than gram negative bacteria.  But, gram negative bactera were also affected by ampicillin so we can assume gram negative bacteria do not fully utilise the transpeptidase enzyme but have a cell wall composed of another compound and therefore is still affected by the mechanism of ampicillin.

However, the two variables are not directly proportional even though we would expect them to be.  For example, if we look at 2µg / µL and  4µg / µL in both experiments, we see that the mean diamater increases from 44mm to 50mm in the Bacillus Subtilis and in the Escherichia Coli the mean diameter increases from 30mm to 32mm.  Also, when looking at 0.5µg / µL and  1µg / µL, the mean increase in diameter is from 37mm to 40mm and 22mm to 26mm.  Since these two variable are not directly proprotional, it would prove innaccurate for me to extrapolate the points from my graph to predict zones of clearance at higher concentrations.  If the two variables were directly proportional, we would expect a straight line, making it straightforward to extrapolate a line of best fit for higher, unknown concentrations. 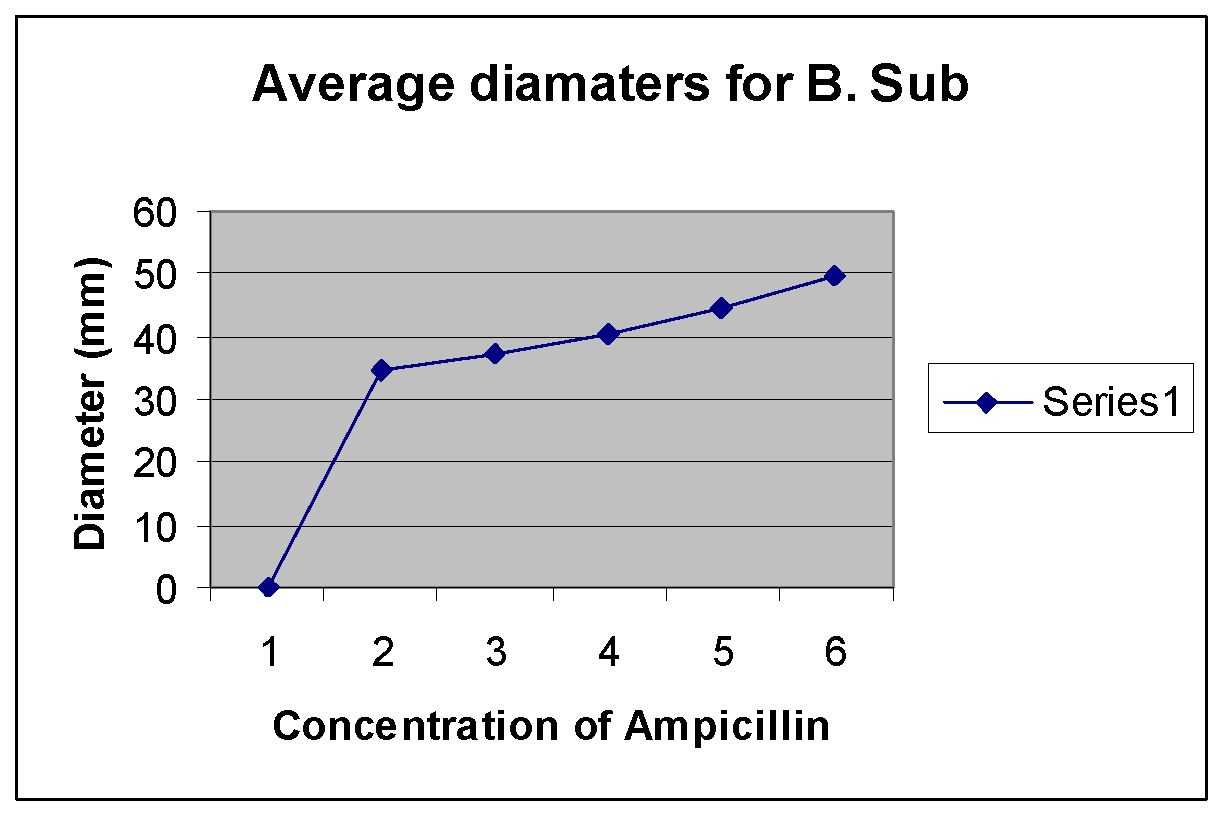 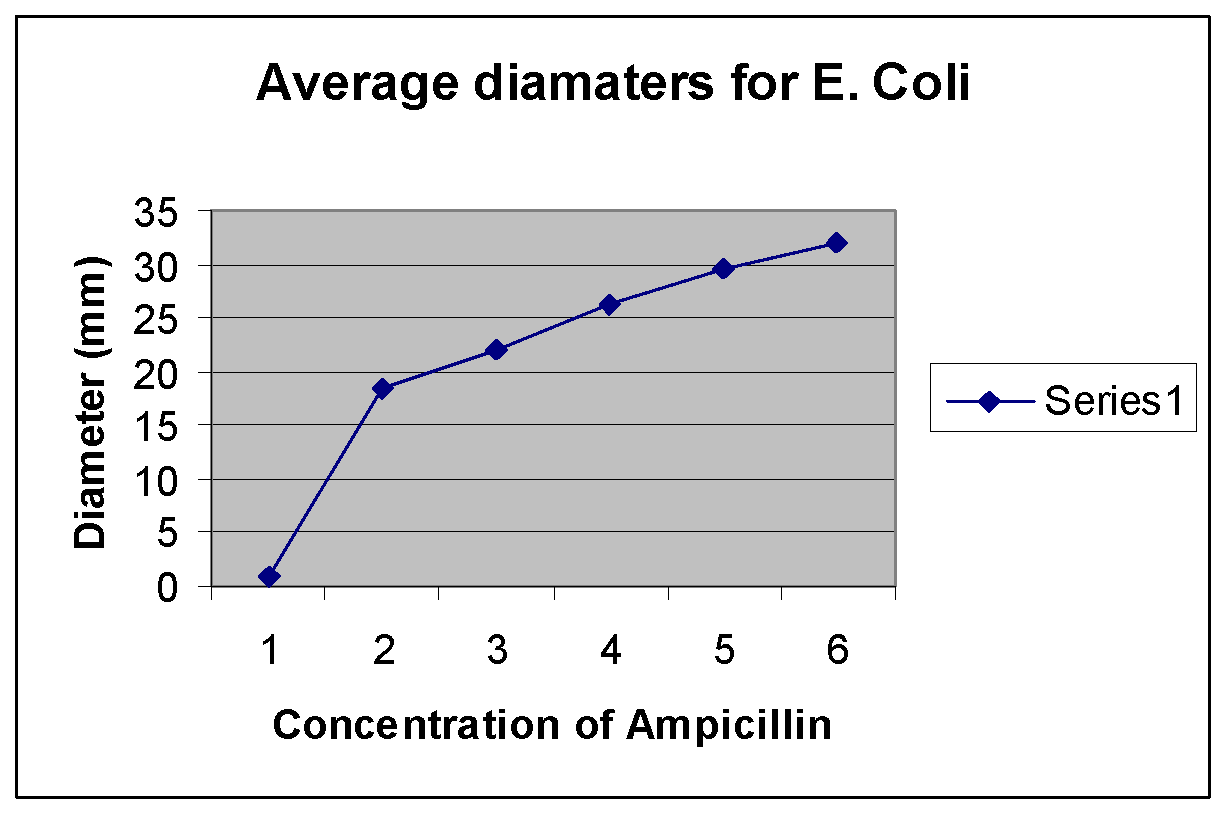 Limitations and errors were expected in the experiment due to so many techniques and apparatus used.  There was a large amount of error in the filter paper discs used to hold the antibiotic.  The first issue was the discs not being a uniform diameter and thickness, because the discs varied in these dimensions, different amounts of antibiotic could be held in the discs, causing some discs to have a larger volume of ampicillin than others and creating a larger zone of clearance than there should be.  The zone of clearance is larger because there is more antibiotic available to diffuse through the agar using disc diffusion.

There were also a zone of clearance produced from some control discs due to the bacteria solution not fully drying and the disc being saturated with water.  As the disc is placed and pressed upon the agar, the bacterial solution is pushed away from the filter paper disc, creating a zone of clearance when there should not be one, creating a clear zone which is not from the antibiotic.

Sterile technique was also quite difficult to carry out strictly in a school laboratory.  Even though there was no visible evidence of any foreign microbes growing on the agar, microbes resistant to ampicillin could have contaminated the antibiotic disc whilst being transferred onto the agar and affected transpeptidase inhibition.  Another problem was the time period in which the plates were checked for bacterial growth; checking the plates after incubation for 24 hours could have showed if the plates showing 0 for all concentrations was due to no bacteria being present on the plate or the weaker concentration diffusing completely through the plate.

There was also a limitation with antibiotics; there were too few concentrations used.  More concentrations used could have increased accuracy and also shown whether there is a maximum effect on the inhibition of bacterial growth because ampicillin acts as a competitive inhibitor on the enzyme transpeptidase, preventing cross link formation, leading to cell lysis.  If ampicillin acts as a competitive inhibitor, then there must be a point of maximum effect where no more active sites can be occupied.

Despite having results which agreed with my hypothesis, the average values were not directly proportional.  This means that extrapolating any line of best fit would not produce an accurate prediction for the area of effect for higher concentrations of ampicillin.  Even with mean values and a line of best fit, the only way to improve the results would be to use more concentrations of antibiotic.  More points plotted would results in a great level of accuracy and therefore a more accurate prediction for higher, unknown concentrations of antibiotic.  The investigation could have also been extended to include other similar antibiotics, such as penicillin or amoxycillin, to see whether or not they are more effective in inhibiting the growth of gram positive and gram negative bacteria.