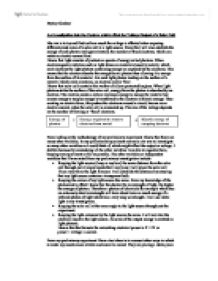 An Investigation into the Factors, which affect the Voltage Output of a Solar Cell

An Investigation into the Factors, which affect the Voltage Output of a Solar Cell

My aim is to try and find out how much the voltage is affected when exposing different sized areas of a solar cell to a light source. From this I will also establish the energy of each photon and approximately, the number of freed electrons, which can make an electric current flow.

I know that light consists of packets or quanta of energy called photons. When electromagnetic radiation such as light shines on materials (usually metals), which emit electrons the light photons containing energy are captured by the electrons. This means that the electron absorbs the energy from a photon thus allowing it to escape from the surface of its material. For each light photon landing on the surface of a material which emits electrons, an electron can be ‘free’.

I know that solar cells contain thin wafers of silicon protected by glass. When light photons strike the surface of the solar cell, energy from the photon is absorbed by an electron. The electron needs a certain minimum energy to escape the material but excess energy or surplus energy is transferred to the electron as kinetic energy. Thus creating an electric force, this pushes the electrons around a circuit, known as an electric current, when the solar cell is connected up. The size of the voltage depends on the number of flowing or ‘freed’ electrons.

The Same or Very Similar results (only 0.01 differences)

Results Table to show the Average of my Experiments

From my results I have recognized a general trend however I have not established clear pattern because my results are very scattered and they also contain anomalies.    I think this is due to the poor quality equipment that I used because I feel that I have followed a clear and precise method.

I think that if I extended my investigation further I could eventually find a clear pattern of results and have my previous predictions fully supported. If I were to extend this investigation again, I would use a solar cell containing panels of all the same size and all the same sensitivity, which would produce extremely similar voltages. I would also use equipment of a higher standard therefore improving the reliability of my results. I would use the method that I followed in my original experiment and would repeat it three times and find an average set of results.

I would also plot my further set of results on a graph and compare it with that of my original experiment and I would notice the difference and see to what extent the size and sensitivity of the individual panels have on the voltage output of the whole solar cell.