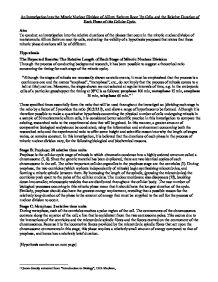 An Investigation into the Mitotic Nuclear Division of Allium Sativum Root Tip Cells, and the Relative Duration of Each Phase of this Cellular Cycle

An Investigation into the Mitotic Nuclear Division of Allium Sativum Root Tip Cells, and the Relative Duration of Each Phase of this Cellular Cycle. Aim To conduct an investigation into the relative durations of the phases that occur in the mitotic nuclear division of meristematic Allium Sativum root tip cells, evaluating the validity of a hypothesis proposed that states that these mitotic phase durations will be of different. Hypothesis The Expected Results: The Relative Length of Each Stage of Mitotic Nuclear Division Through the process of conducting background research, it has been possible to suggest a theoretical ratio concerning the timing for each stage of the mitotic cycle; "Although the stages of mitosis are necessarily shown as static events, it must be emphasized that the process is a continuous one and the names "anaphase", "metaphase", etc., do not imply that the process of mitosis comes to a halt at this juncture. Moreover, the stages shown are not selected at regular intervals of time, e.g. in the embryonic cells of a particular grasshopper the timing at 38�C is as follows: prophase 100 min, metaphase 15 min, anaphase 10 min, telophase 60 min." 1 These specified times essentially form the ratio that will be used throughout the investigation (dividing each stage in the ratio by a factor of 5 provides the ratio (20:3:2:12), and allow a range of hypotheses to be formed. Although it is therefore possible to make a quantitative hypothesis concerning the physical number of cells undergoing mitosis in a sample of 50 meristematic allium cells, it is considered better scientific practice in this investigation to compare the existing, researched ratio to the experimental data that will be gained. In this manner, a greater amount of comparative biological analysis can be conducted; using the information and environment concerning both the researched ratio and the experimental ratio to offer some insight and scientific reason into why the length of stages varies, or remains constant. ...read more.

When used, the null hypothesis is presumed true until statistical evidence in the form of a hypothesis test indicates otherwise. It is in this manner that the concordance of both the expected and observed results will be analysed; comparing the difference (and hence, degrees of freedom) between the cell counts. An appropriate biological and genetic model to use when comparing these cellular quantities is the Chi-Squared test; an assessment that can be directly used to evaluate the level of difference between the predicted results (which will be calculated from the suggested time ratio in the background research section), and the observed results (which will be gained through the experimental process). It is hypothesized that the null hypothesis will be accepted; demonstrating the relationship stated in the initial hypothesis; the statement of the expected phase durations. When considering the validity of the null hypothesis suggested, it is necessary to complete a relevant statistical form of analysis to objectively form a conclusion. The primary statistical analysis that will be utilised will be the Chi-Squared Test, a common test in the field of genetic study to examine the level of difference between the predicted results, and those observed and recorder during experimental procedure. The Chi-Squared Test: Method of Statistical Analysis The equation used to determine the validity of the null hypothesis in the Chi-Squared test is: Where O is the results that were collected through the process of conducting the experiment, and E is the results that should be expected, according to the background research expressed early in the investigation. From this background knowledge, it has been ascertained that the timings are: prophase 100 min, metaphase 15 min, anaphase 10 min and telophase 60 min. These timings form the ratio of 100:15:10:60 respectively, which simplifies to directly form a ratio of 20:3:2:12. It should also be noted that the observed results specified for calculation are the average results calculated from the collated class data. ...read more.

The Process of Mitosis in Allium Root Tip Cells Interphase Prophase Metaphase Anaphase Telophase Cytokinesis and Daughter Cells The above light micrographs have been included to offer some insight into the actual, physical appearance of the varying stages of mitotic nuclear division. The images above originated from a high-magnification, high resolution optical, light microscope however, and are larger and offer a greater clarity (ability to resolve two points), than should be expected from a conventional, medium power light microscope. From the slides, it is clear what stage of mitosis the cell is currently undergoing (with the possible exception of Interphase and prophase - this will be discussed later in the evaluation section of the investigation). In reality, the image should be expected to be somewhat like the micrographs provided below. Allium Sativum & Related Histology The region of root tissue that is of importance during this investigation is the meristematic region ("zone of multiplication"), found in the area directly between the root cap and the zone of elongation. It is in this area that there is a range of cells undergoing mitotic cellular division, of which it should be possible to identify a number of cells in each mitotic phase.8 A meristem is a tissue in plants consisting of undifferentiated cells (meristematic cells) and found in zones of the plant where growth can take place - the roots and shoots. Differentiated plant cells generally cannot divide or produce cells of a different type. Therefore, cell division in the meristem is required to provide new cells for expansion and differentiation of tissues and initiation of new organs, providing the basic structure of the plant body.9 This area of meristematic growth is protected by the root cap region, (an area of differentiated cells), and hence is not directly exposed. Unlike most multicellular animals, in which growth occurs in multiple (and often many) tissues and organs throughout the organisms, it is common in plant-like organisms for there only to be two meristematic regions of cellular growth, often these are present in the 'root and shoot' of the organism. ...read more.

This is a very detailed and well written report.
1. Researched information should be referenced.
2. Several sections, including the safety and limitations sections, are extremely detailed and show a professional approach.
3. The evaluation should suggest further research opportunities.
4. Some of the sentences are a bit long winded.
*****