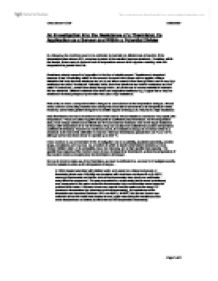 An Investigation into the Resistance of a Thermistor, its Application as a Sensor and Within a Potential Divider

An Investigation into the Resistance of a Thermistor, its Application as a Sensor and Within a Potential Divider In a Brewery, the conditions need to be controlled to maintain an efficient rate of reaction. If the temperature rises above 40?C, enzymes involved in the reaction become denatured. Therefore, within the reactor, there needs to be some sort of temperature sensor which signals a warning when the temperature is greater than this. Resistance simply means the "opposition to the flow of electric current." Resistance is important because it has a controlling effect on the amount of current which flows with an applied voltage. Materials that have few free electrons and so do not allow current to flow through them have a very high resistance are called "Insulators". Materials which have free electrons are lower in resistance and are called "Conductors"...current flows freely through them...and there are of course materials in between the two extremes. Different materials have their own respective resistance e.g. Copper has a very low resistance whereas perspex or pure water has quite a high resistance. First of all, we need a component which changes its conductance as the temperature changes. Almost every common conducting material does change its conductance somewhat as its temperature varies. However, some make greater changes for a smaller degree of change. (ie. they have a high resolution) Most thermistors are made of semiconductor metal oxides whose resistance decreases very rapidly with temperature. These are called negative temperature coefficient (ntc) thermistors. As the temperature rises, more charge carriers are available and the conductance increases. Due to the larger resistance change with temperature of an ntc thermistor, they are usually more suitable than positive temperature coefficient thermistors. ...read more.

I also made sure that the thermometer and thermistor were very close to each other. However there still may have been some slight differences in temperature between the point which was being measured by the thermometer and the thermistor. Therefore, next time it would be a good idea to stir the water constantly and perhaps to use a more thermally conductive medium. * Self heating effects The thermistor may have been releasing some energy also which it will have then sensed, and will have affected the thermistor's resistance. * Apparatus errors The thermometer has a ? 0.03% error margin and the thermistor has a ? 10% error margin. This gives a total maximum % error of 10.03% which is very high. The accuracy and stability of the multimeter is an additional consideration to add to this figure. Such a high % error margin is likely to have been the most influential source of inaccuracies in the results. * The Resistance of wires will have had an affect on the readings but it is so minimal that this is negligible Random error was evident, this is when the results are never the 'true' value but fluctuate around a value. This is why an average was calculated of the results. Conclusion We have seen how resistors can be important when used within potential dividers which are used for sensing. There are many special resistors whose conductance varies when a physical stimulus changes. One such example is a thermistor. This can be used within a potential divider to convert the physical stimulus into an electrical signal. This output voltage can be used, for example, to power a warning alarm if the temperature in a brewery exceeds 40?C. Chris Schulz 12CW 02/05/2007 Page 1 of 8 ...read more.