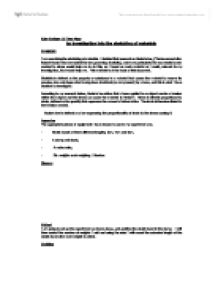 An investigation into the stretching of materials

An investigation into the stretching of materials

I am examining the stretching of materials.  I decided that research on Hooke’s law, (The law named after Robert Hooke who formulated the law governing elasticity), and more particularly the way elastic bands reacted to stress would help me to do this, so I found as much material as I could, relevant to my investigation, that would help me.  This material is at the back of this document.

Elasticity is defined as the property or substance in a material that causes the material to resume its previous size and shape after having been stretched (or compressed) by a force, and this is what I have decided to investigate.

According to my research below, Hooke’s law states that a force applied to an object creates a tension within that object and the stress can cause the material to ‘deform’.  Stress is directly proportional to strain, defined as the quantity that expresses the amount of deformation.  The strain is therefore linked to the tension created.

Hooke’s law is defined asa law expressing the proportionality of strain to the stress causing it.

The appropriate pieces of equipment I have chosen to use in my experiment are;

I am going to set up the experiment as shown above, and position the elastic band in the clamp.

After studying my research, it is clear to me that the results I have collected follow no specific pattern, and the extension of the band after each weight is added is random.  Below I have taken some results from my table to better illustrate my opinion.

As you can see there is no connection between the extension before or after each weight is added to the elastic band.  To show this is the same with the other bands I checked the results from the other two tables and found that my prediction was correct I have inserted some of the sections from the tables I studied in greater detail below.

Although Hooke’s law only refers to springs, other materials are said to obey the law too if the extension is proportional to the stretching force.  This may be written as an equation;

I decided that to better understand the experiment I was about to conduct, I should perform a similar experiment with springs, to test Hooke’s law and see if his theory was accurate.  I had already predicted my theory about the proportionality of stress to strain in elastic bands not being linear, based upon my research in the Key Science four book, I just needed to test one of Hooke’s other discoveries in his study of elasticity to see if his observations were reliable.

These were my results;

A graph of these results can be seen on the next page.

The World of Physics

This book goes even further that those I had previously researched as it goes on to describe what actually happens in the molecules of an object as it is stretched.

The tension we feel in a stretched spring is due to all the forces of attraction between the molecules in the spring.

The molecules of a solid are limited to vibrations about a fixed position.  They are closely packed and usually in a regular pattern, making them high density objects.  Solids return to their original shape when  stretched or deformed to a certain extent.