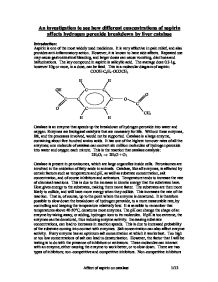 An investigation to see how different concentrations of aspirin affects hydrogen peroxide breakdown by liver catalase Introduction: Aspirin is one of the most widely used medicines. It is very affective in pain relief, and also provides anti-inflammatory action. However, it is known to have side affects. Repeated use may cause gastrointestinal bleeding, and larger doses can cause vomiting, diarrhoea and hallucinations. The key compound in aspirin is salicylic acid. The average dose 0.3-1g, however 10g or more, in a dose, can be fatal. This is a molecular diagram of aspirin: COOH-C6H4-OCOCH3 H H OH C C O C C C O C O C C CH3 H H Catalase is an enzyme that speeds up the breakdown of hydrogen peroxide into water and oxygen. Enzymes are biological catalysts that are necessary for life. Without these enzymes, life, and the processes involved, would not be supported. Catalase is a large enzyme, containing about five hundred amino acids. It has one of the highest turnover rates of all the enzymes; one molecule of catalase can convert six million molecules of hydrogen peroxide into water and oxygen each minute. This is the reaction that catalase catalysis: 2H2O2 2H2O + O2 Catalase is present in peroxisomes, which are large organelles inside cells. Peroxisomes are involved in the oxidation of fatty acids in animals. Catalase, like all enzymes, is affected by certain factors such as temperature and pH, as well as substrate concentration, salt concentration, and of course inhibitors and activators. Temperature tends to increase the rate of chemical reactions. This is due to the increase in kinetic energy that the substrates have. Heat gives energy to the substrates, making them move faster. The substrates are then more likely to collide, and will have more energy when they collide. This increases the rate of the reaction. That is, of course, up to the point where the enzyme is denatured. ...read more.

0.01 46 This took too long. When aspirin is added, the time taken might be very long. 0.05 24 This was about right. I will use this concentration in my final experiment. I did not need to change the liver concentration in the beads. I will use the following concentrations and volumes in the final experiment. Volume of hydrogen peroxide 10cm3 Concentration of hydrogen peroxide 0.05 mol dm-3 Concentration of ox liver in processor 5g : 100 ml water Ratio of liver : buffer : alginate 1:1:3 Method for final experiment: These are the stages in the method: Make Beads: Weigh out 5 grams of Ox Liver Place in a food processor and add 100cm3 of water Process the mixture for 2 minutes until liver is broken down Filter the mixture into a beaker Mix together: 2cm3 of liver solution 2cm3 of pH 7.4 buffer. This is the pH of blood. In the human body, the reaction that I am testing occurs where there is a lot of blood. It is therefore safe to say that this pH will not denature any of the substances that I am using. 6cm3 of 4% sodium alginate Using a syringe, drop small beads of mixture into 0.1 mol dm-3 CaCl2 to harden Wash the beads Select beads of the same size. Larger beads have a smaller surface area : volume ratio. Most of the reactions that take place will occur on the surface of the bead, giving off oxygen, which forms bubbles on the surface. If the bead is large, more oxygen will have to be created to reduce the density of the bead to make it rise. Beads must be similar sizes, to reduce variability in the results. Make 0.05 mol dm-3 H2O2 solution: Measure out 5cm3 of 1mol dm-3 H2O2 Add 5cm3 of pH 7.4 buffer Add 90cm3 of water Put 10cm3 of 0.05 mol dm-3 H2O2 solution into 7 test tubes. ...read more.

I would measure the beads to �0.5mm, and then group them into very similar sizes. However, I would need to be careful that I do not crush or squash the beads when measuring them. Measuring the beads to a greater degree of accuracy would mean less variability in the results, and would enable me to write a much more accurate conclusion. Another variable that was not very well controlled was the temperature. I did not have access to a water bath, so was unable to keep the temperature exactly the same. I thought this would not matter as I did not feel that changes in the temperature, would affect the rate of hydrogen peroxide breakdown. This might be true, but next time, I would control the temperature better. The reaction, 2H2O2 2H2O + O2 is exothermic. This means heat is given out by the reaction, which inevitably increases the temperature if the heat is not dispersed rapidly enough. A water bath would do this. For my first set of repeats, I put the beads into test tubes that had already been used for a test. I did not think that this would matter, but as the reaction is exothermic, the temperature might have been greater for the repeats. However, this is not reflected in my results. Increasing temperature tends to increase the rate of reaction, but my results do not show an increase in rate for the later repeats. If I were to do this experiment again, I would use water baths. I think the variability in my results is mainly to do with the difference in bead size. But I would still control these other variables better as well. Conclusion: On the basis of this one experiment I think I have enough evidence to tentatively accept the hypothesis that increasing the concentration of aspirin will decrease the rate of breakdown of hydrogen peroxide into water and oxygen by liver catalase. However, to be sure I would need to repeat the experiment many times with the improvements to the method. Affect of aspirin on catalase 1/12 ...read more.