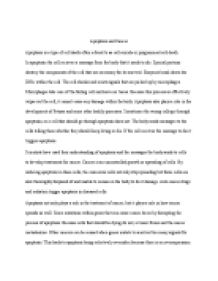 ﻿Apoptosis and Cancer Apoptosis is a type of cell death often refered to as cell suicide or programmed cell death. In apoptosis the cell recieves a message from the body that it needs to die. Special proteins destroy the components of the cell that are necessary for its survival. Enzymes break down the DNA within the cell. The cell shrinks and emits signals that are picked up by microphages. Microphages take care of the failing cell and leave no traces. ...read more.

If the cell receives the message to die it triggers apoptosis. Scientists have used their understanding of apoptosis and the messages the body sends to cells to develop treatments for cancer. Cancer is an uncontrolled growth or spreading of cells. By inducing apoptosis in these cells, the cancerous cells not only stop spreading but those cells are also thoroughly disposed of and unable to remain in the body to do it damage. Anti-cancer drugs and radiation trigger apoptosis in diseased cells. ...read more.

This leads to apoptosis being selectively overriden because there is an overexpression of the signal for apoptosis. In particular a mutation in p53, a protien, can cause cells with damaged DNA to not undergo apoptosis like they should. This can cause tumors to develop. Apoptosis is different from the other form of cell death, necrosis, in that necrosis occurs when there is an injury to the cell. Apoptosis occurs if triggered. Necrosis can leave dead damaged cells behind, while apoptosis removes the cell completely. Since cancer can be caused by a signal failure or mutation of a gene that controls cell growth, apoptosis and cancer are the focus of many studies instead of necrosis. ...read more.