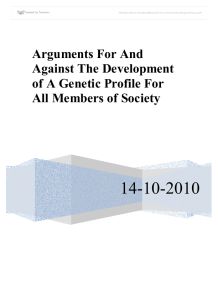 All living organisms have DNA with the same chemical structure. The only difference between human and animal DNA lies in the order of base pairs. There are over millions of base pairs in each person's DNA so that every individual has a very different sequence. Using these sequences, any person could almost easily be identified solely by the sequence of their base pairs. DNA fingerprinting allows scientists to determine whether two DNA samples belong to the same person, relatives, or totally non-related people. Scientists use a small number of sequences of DNA that have been known to vary among individuals a great deal, and analyse those samples to get a certain probability of a match. A British scientist, Alec Jeffreys, first perfected the technique of using DNA samples to extract a unique marker-sometimes called a "genetic fingerprint"-that ensured nearly absolute proof of identification. After the brutal rape and murder of two young women in the small English village of Narborough in 1986, police used Jeffreys' DNA fingerprinting method to locate the culprit. (Rosen, C. 2010) Since then, DNA fingerprinting systems have played an increasingly important role in many aspects of human genetics, most notably in forensic and legal methods [Green, et al. ...read more.

(Martin, C. 1992) o Detailed fingerprinting had not yet been developed to establish procedures that could be followed during the DNA typing process to provide adequate documents to ensure DNA typing occurred within a particular standard. Today, scientists as well as law enforcement officers are petitioning to create an international database in which every individual's genetic fingerprint would be stored. An argument for or against the creation of such a database could easily be defended case by case. It can be argued that the creation of an international data base can prove to have a positive impact in the field of science, law and on society because: * With a vast database, quality and accuracy of genetic tests can be achieved and this information can be used for court proceedings. * The application of DNA fingerprinting to forensic and legal medicine has guaranteed a high public profile for DNA fingerprinting, and scarcely a week goes by without crime being successfully solved by molecular genetics. [Jeffreys (1991)]. At the same time it ensures that every falsely accused citizen has a genetic alibi. ...read more.

* There is insufficient regulation and oversight of how private companies may use genetic information. As a result: > There is a serious concern that if made available, insurance companies may use the information and refuse to give life insurance to individuals at a genetic disadvantage due to disease in their genes. > Similarly, companies may not give jobs to these individuals with genetic weaknesses as they may need regular or prolonged sick leave in the future. Each person may vary in opinion on this topic based on whether or not it would affect them positively or negatively. As long as the donation of genetic samples of individuals are taken anonymously, voluntarily and FULLY privacy- protected, most information seems to indicate that the arguments for the development of genetic fingerprint profile for all members of society outweighs its arguments against it. In my opinion, even though the development of a genetic profile database may not in itself violate the international civil liberties (Walsh, R. 2006), there is no guarantee that this information may not be leaked or be accessed by third parties that may later discriminate against "genetically weak" individuals. For this reason, I am against the development of a genetic fingerprint profile for all members of society. ...read more.

*** A reasonable A-level report, which presents key arguments for and against recording everyone's DNA profiles in a database. Referencing is used, but the report lacks detail and could be improved by:
1)Relevant background information about how DNA profiles/fingerprints are generated
2)Some explanation of key terms like Loci/Genome etc/Short tandem repeat
3)Relevant images of genetic profiles to illustrate how they are unique
4)Sections to improve the report structure
5)Clear descriptions of how the reliability and validity of DNA profiles can be compromised if quality control does not prevent DNA breakdown and contamination