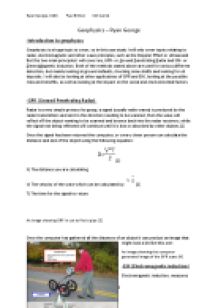 As-Physics Investigation, Geo-Physics. the two main principles I will cover are, GPR- or Ground Penetrating Radar and EM- or ElectroMagnetic induction.

Geophysics is a huge topic to cover, so in this case study I will only cover topics relating to radar, electromagnetic and other wave principles, such as the Doppler Effect or ultrasound. But the two main principles I will cover are, GPR- or Ground Penetrating Radar and EM- or ElectroMagnetic induction. Both of the methods stated above are used for various different detection, but mainly looking at ground defaults, checking mine shafts and looking for oil deposits. I will also be looking at other applications of GPR and EM, looking at the possible risks and benefits, as well as looking at the impact on the social and environmental factors.

Radar is a very simple protocolto grasp, a signal (usually radio waves) is produced by the radar transmitters and sent in the direction needing to be scanned, then the wave will reflect off the object wanting to be

The transmitter coil generates an electromagnetic flied at a specific frequency. The primary field then causes electrical currents to flow in conductive material at and in the subsurface. This flow of currents, called eddy currents, and then generates another magnetic field, or the secondary field, which is then detected by the secondary or receiver coil. The magnitude of the signal on the second coil depends on the type and disruption of the material in the sub surface. [6][7] Once this process is over the computer can generate an image looking like this:

Using radar for looking underground at mines, or pipes doesn’t have a significant impact of the environment or social aspects, because the signal used is very weak. But one factor to think about is that to look underground without

Eddy currents- are electric currents induced in conductors when a conductor is exposed to a changing magnetic field.

EM- is the production of an electric current across a conductor moving through a magnetic field. It underlies the operation of generators, transformers, induction motors, and electric motors

GPR- is a geophysical method that uses radar pulses to image the subsurface. This non-destructive method uses electromagnetic radiation in the microwave band (UHF/VHF frequencies) of the radio spectrum, and detects the reflected signals from subsurface structures.

Radar- is an object-detection system which uses radio waves to determine the range, altitude, direction, or speed of objects. It can be used to detect aircraft, ships, spacecraft, guided missiles, motor vehicles, weather formations, and terrain.